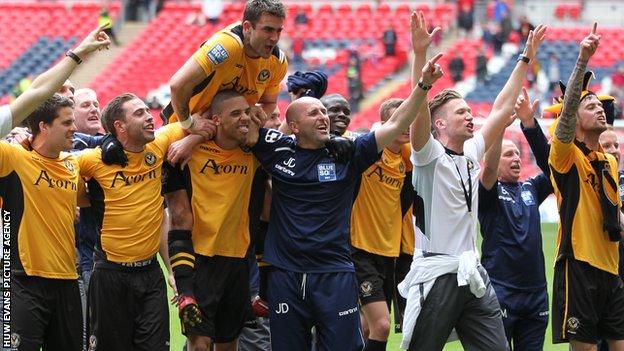 Newport County have been drawn away to Championship side Brighton & Hove Albion in the first round of the Capital One Cup.

Justin Edinburgh's side will visit the Amex Stadium during the week commencing 5 August.

It will be Newport's first appearance in the competition since the 1987-88 season.

Newport lost 6-0 over two legs to Crystal Palace in the second round of the Littlewoods Cup in 1987.

"I think it is a fabulous draw for the club and the fans," said Tim Harris, the Director of Football at Newport County.

"I think they are really excited by the fact that the Capital One Cup is seeded and we get the opportunity to play down in Brighton.

"It is a fantastic opportunity for the players, for the fans and everybody involved with the club. I am sure everyone is really looking forward to it."

County were relegated from the Football League following the 1987-88 season and were liquidated in 1989.

Newport ended their 25-year Football League exile with a 2-0 win over Wrexham in the Conference Premier Final at Wembley which secured promotion to League Two.

Brighton missed out on promotion to the Premier League at the end of last season after defeat to Crystal Palace in the play-offs.

Manager Gus Poyet along with assistant manager Mauricio Taricco and first-team coach Charlie Oatway were suspended by Brighton in the wake of the play-off semi-final defeat.

Taricco has been cleared to return to his job by the club but the Seagulls confirmed in a statement on the club website that "internal processes" concerning Poyet and Oatway were still ongoing.