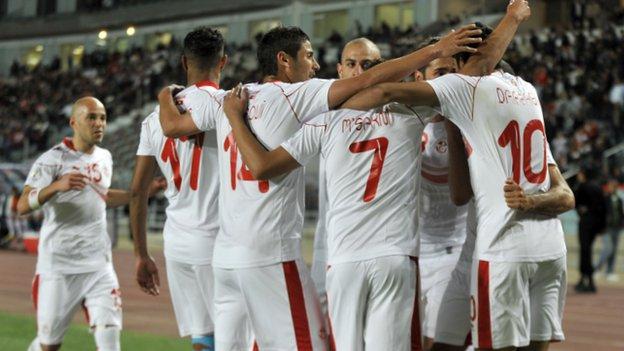 Tunisia looked to have qualified for the play-off round of Africa's World Cup qualifying with a 1-1 draw with Equatorial Guinea in Malabo on Sunday.

However, news of a Fifa probe into the ineligibility of an Equatorial Guinea player in the 4-3 win over Cape Verde in March has put Tunisian progress on hold.

World football's governing body says it recently ruled on the issue matter but the 2012 Africa Cup of Nations co-hosts have appealed the decision.

GROUP B STANDINGS BEFORE FIFA PROBE

Should Cape Verde be awarded the points from a match they originally lost they would move to the nine points, just two behind Tunisia at the top of Group B.

It would set up a winner-takes-all clash in the final group game as Tunisia host Cape Verde.

As it stands though Sunday's result took unbeaten Group B leaders, Tunisia, to 11 points, five more than Cape Verde.

Equatorial Guinea took the lead through a Juvenal penalty after 36 minutes.

But Oussama Darragi also converted a spot-kick after 64 minutes to seal the point that was needed.

After appearing at three consecutive World Cups between 1998 and 2006, Tunisia missed the first tournament on African soil after failing to qualify for South Africa 2010.

The Carthage Eagles lost their final qualifier in Mozambique, so allowing Nigeria to squeeze through to the finals.

Five coaches have taken charge since then, two of them more than once (Faouzi Benzarti and Sami Trabelsi), but it is former international Nabil Maaloul who has overseen their recent progression.

The man who led Esperance to the 2011 African Champions League title took charge in February - shortly after Trabelsi stepped down after his side exited the 2013 Africa Cup of Nations in the group stages.

In his three World Cup qualifiers so far, Maaloul has steered his nation to one win and two draws, both of which have come away from home.

Ranked sixth on the African continent by world governing body Fifa at present, Tunisia may find themselves seeded when the draw for the play-offs takes place in Cairo on 16 September.

The five best-placed teams in the Fifa rankings for 12 September will be seeded for the draw, and Tunisia may squeeze in with Mali - who are currently ranked third - can no longer qualify from Group H.