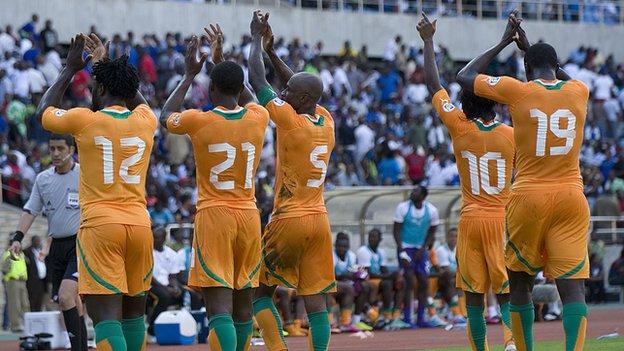 Ivory Coast became the first team to reach the third and final round of Africa's World Cup qualifying when winning 4-2 in Tanzania.

Later both Ethiopia and Tunisia thought they had made it through - only to have that thrown into doubt by intervention from football's world governing body Fifa.

BBC Sport analyses the state of play with just one round of matches left in Groups A-E.

Ethiopia continued their recent upturns in fortunes as the 1962 African champions beat South Africa 2-1 at home in Addis Ababa on Sunday.

The victory gives them a five-point cushion at the top of Group A, with just one round of matches left.

South Africa, meanwhile, earn unwanted history for not since 1986 World Cup hosts Mexico failed to appear at the 1990 finals has a team that staged the World Cup failed to qualify for the next edition of the tournament.

Yet Bafana Bafana could be thrown a lifeline after Ethiopia's passage to the final round of African qualifying was cast into doubt when Fifa announced disciplinary proceedings against them late on Sunday.

In a dead rubber on Saturday, Botswana won their first match in Group A when defeating Central African Republic 3-2 on home soil.

Tunisia are at the top of their group and five points clear of Cape Verde after gaining the point they needed in Equatorial Guinea to make the third round.

Trailing 1-0 against the only side that could catch them in the group, Oussama Darragi scored a second-half penalty to seal the point needed and maintain the 2004 African champions' unbeaten run.

However, news of a Fifa probe into the ineligibility of an Equatorial Guinea player in the 4-3 win over the islanders in March could put Tunisian progress on hold.

The island nation, who impressed on their debut at this year's Africa Cup of Nations, beat Sierra Leone 1-0 on Saturday to move up to second in the table, with Equatorial Guinea now propping up the group.

Ivory Coast kept themselves in contention to reach a third consecutive World Cup when coming from behind to win 4-2 in Tanzania.

The victory takes the Elephants to the play-offs, where the West Africans will be one of the strongest seeds.

The 1992 African champions have registered four wins from their five games so far, with only second-placed Morocco holding them to a draw.

The Atlas Lions, who beat The Gambia 2-0 on Saturday night, now turn their attentions to the 2015 Africa Cup of Nations, which the North Africans will host.

Ghana enjoyed one of the most productive weekends in qualifying, even though the Black Stars have yet to reach the play-off stage.

However, the World Cup hopes of the team that reached the last eight in 2010 received a major boost when Zambia were held to a 1-1 draw at home by Sudan on Saturday.

This gave Ghana the chance to go a point clear at the top of Group D should they win in Lesotho - and they made no mistake with a 2-0 win thanks to goals in each half from Christian Atsu and Asamoah Gyan.

Boasting just a point less than the Black Stars' tally of 12 points, 2012 African champions Zambia can only reach the third round with victory in Ghana in both sides' final qualifier in September.

The Black Stars just need a draw to progress.

Congo had the perfect platform to reach the play-offs on Saturday, knowing that victory at home to Burkina Faso would take them through.

However, the runners-up at this year's Nations Cup produced one of their best displays in the group, as Aristide Bance penetrated the Congolese defence for the first time in Group E to earn a vital 1-0 win.

The Congolese still have their own fate in their hands, needing to win their final qualifier in Niger to go through.

Should the Red Devils fail to win in the heat of Niamey, Burkina Faso can progress with a win at home to Gabon, although the Panthers can still qualify themselves after beating Niger 4-1 in Franceville on Saturday.

For the 2012 Nations Cup co-hosts to progress, they must win in Ouagadougou while Congo lose in Niger - with a four-goal swing needed as well.