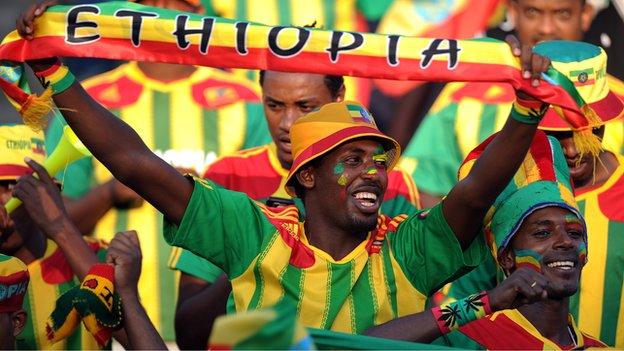 Ethiopia progressed to the African play-offs after knocking 2010 World Cup hosts South Africa out of the race to Brazil with a 2-1 win in Addis Ababa.

The come-from-behind victory means the Ethiopians cannot be caught in Group A, with one round of matches still left.

But Getaneh Kebede levelled just nine minutes before Parker scored a spectacular own goal after 70 minutes to hand Ethiopia victory.

Yet the East Africans' passage to the final round of African qualifying was cast into doubt as Fifa announced disciplinary proceedings against them late on Sunday.

Should they avoid sanction, coach Sewnet Bishaw will hope to continue his success with Ethiopia - with the team a two-legged tie away from qualifying for the World Cup for the first time.

However, they are likely to face difficult foes when the play-off draw is made on 16 September as they are only ranked 29th in Africa - with the five best-ranked teams being seeded for the third and final round of qualifying.

"Absolutely devastated about the result," wrote South Africa midfielder Dean Furman, who played the 90 minutes in Addis, on Twitter.

"We gave everything but it was not to be. We must now grow stronger (and) prepare for the next campaign."

The defeat continues South Africa's poor record in World Cup qualifying since the last time they managed to reach the finals off their own steam - when doing so in 2002.

They missed out on the 2006 edition before qualifying automatically for the 2010 finals as hosts.

Not since 1986 World Cup hosts Mexico failed to appear at the 1990 finals has a team that staged the World Cup failed to qualify for the next edition of the tournament.

Meanwhile, the win caps a remarkable revival in the fortunes of Ethiopia, one of African football's founding fathers.

The East African nation, which is far more famous for its prowess in athletics than football, took part in the inaugural Africa Cup of Nations in 1957, finishing second in a three-team tournament.

They won the tournament as hosts five years later but faded in power as more African nations entered international football after gaining independence.

After the 1970 finals, Ethiopia qualified for the Nations Cup in 1976 and 1982 but were then wholly absent from the finals until qualifying for this year's tournament in South Africa.

With many fans watching on a big screen in Addis Ababa and others tuned in around the country, Ethiopia fell behind as Parker latched onto a long ball from goalkeeper Itumeleng Khune before drilling home.

The turning point in the game arguably came seven minutes later as Reneilwe Letsholonyane had a golden opportunity to double South Africa's lead - only to fail to fire home.

With South Africa knowing that victory would have taken them top of Group A, it was to prove a costly miss.

Moments later, Ethiopia - who stay unbeaten in the group - profited from poor defending by South Africa, with four Bafana Bafana players failing to clear and so allowing Kebede to find the net from a tight angle.

Twenty minutes from time, Parker scored his spectacular own goal - and South Africa were clinging on at the end as Khune denied Ethiopia two further clear-cut opportunities.