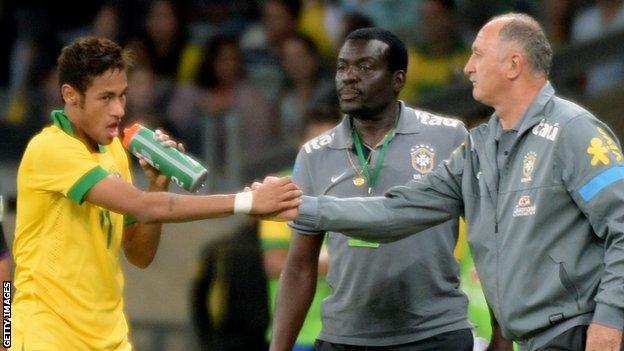 Luiz Felipe Scolari says his Brazil side can develop into a great team after Neymar inspired the five-time world champions to a convincing victory in their Confederations Cup opener.

Neymar, Paulinho and Jo all scored in the in Brasilia, ahead of Wednesday's match against Mexico.

"What pleased me most was the result," Scolari said. "If we can keep evolving tactically and the players can deal with whatever is thrown at them, we can be a great team. We will improve."

Neymar, who joined Barcelona for £49m from Santos two weeks ago, stole the show with a stunning third-minute volley.

Scolari admitted he had been delighted by the response of the 21-year-old, who has been struggling to cope with the immense weight of expectation.

"There are sometimes games when he might not be at his best but Neymar is a star. He makes a difference to the team and he will always do that," Scolari said.

The Santos forward limped off with 20 minutes remaining but it is understood he will be fit to face Mexico.

"It was great to score," Neymar said. "I want to evolve my game and want the team to play as a group. I am glad that my goal set us on the way to victory."

Neymar's wonder goal was the talk of Brazil last night and the youngster admitted it had been a purely instinctive strike. "It all happened in a flash," he said.

"Fred collected the ball and laid it off, I connected full on and happily the ball found the target."

Earlier this week, Brazil switched squad numbers to hand Neymar the mythical number 10 shirt, previously worn by Pele among others, but Neymar said he had not asked for the change.

"The number doesn't matter - what does is the Brazil shirt," he said.

Brazil came into the tournament having failed to convince since Scolari returned to the job in November 2012.

Last week's 3-0 victory over France did, however, provide momentum coming into the first major tournament to be staged in Brazil since the 1950 World Cup.

But Scolari warned against complacency ahead of Wednesday's match in Fortaleza.

"We must beware of Mexico and get over that next hurdle to reach the semi-finals. Mexico have been making life complicated for us for a few years now," he added.

Mexico beat Brazil in the Olympic final on the last occasion the teams met.