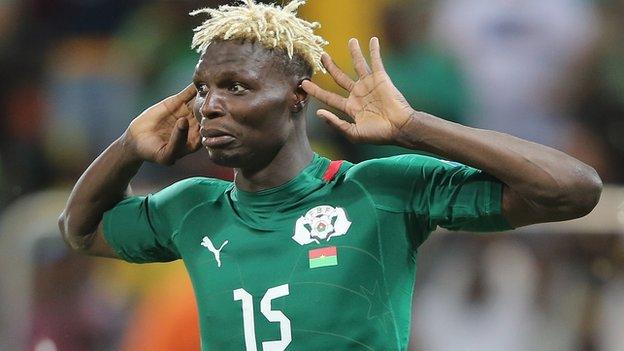 Burkina Faso gave themselves a World Cup lifeline when winning 1-0 at the home of Group E leaders Congo on Saturday.

Aristide Bance's goal after 38 minutes separated the sides in a crunch clash.

The home side would have reached the third and final round of qualifying had they avoided defeat.

Burkina Faso, who were beaten finalists at this year's Africa Cup of Nations, move to nine points, just one less than Congo with one round of games left.

The Red Devils, who conceded their first goal in Group E when Bance struck, must now win their final qualifier in Niger in September to be certain of making the play-offs.

Should they fail to win in Niamey, Burkina Faso - the runners-up at this year's Africa Cup of Nations - can finish top of the group with victory at home to Gabon.

Yet the Gabonese, who co-hosted the 2012 Africa Cup of Nations, will enter the qualifier in Ouagadougou knowing they have an outside chance of qualification themselves.

Gabon won 4-1 at home to Niger on Saturday, with star striker Pierre-Emerick Aubameyang scoring a hat-trick of penalties.

The victory means the Panthers can qualify if they win in Burkina Faso, and Congo lose in Niger, with a swing of four goals also needed.

The match then became the Aubameyang show as the man attracting a host of admirers across Europe converted his first penalty after 43 minutes.

His second came just three minutes from time but in an extraordinary finish to the game, three players were sent off in the last ten minutes - while two goals came deep into stoppage time.

The first player to go was Niger's Kofi Dankwae after 80 minutes, with Gabon's Eric Mouloungui following him three minutes later.

Kourouma Fatoukouma then received the third card in just six minutes, so allowing Aubameyang to slot home from 12 yards a minute later.

With plenty of time added on following the dismissals, Bruno Ecuele struck in the seventh minute of injury time and there was still time afterwards for Aubameyang to register his unusual hat-trick.

Saturday's match in Congo's second city Pointe Noire, meanwhile, was supposed to be one of celebration, but it was the visitors who gained an element of revenge for their previous meeting last year.

In June 2012, the Burkinabe drew 0-0 at home to the Congolese - but the visitors were later awarded a technical 3-0 win by Fifa after the Stallions were found to have fielded an ineligible player.

Those extra three points had been crucial to Congo's once-healthy lead at the top of the table.

Without a World Cup appearance to their name, Congo - the 1972 African champions - came within a victory of qualifying for the 1998 World Cup only to lose their final qualifier in South Africa.