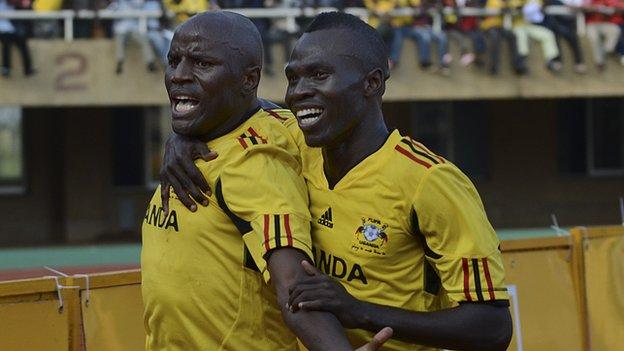 Uganda came from behind to beat visiting Angola 2-1 in Group J of 2014 World Cup qualifying on Saturday.

Tony Mawejje was Uganda's hero for the second week in a row as he scored in the 89th minute to keep the Cranes' hopes of reaching the play-offs alive.

Angola took the lead in the 57th minute through Job and Uganda's woes continued when Hassaan Wasswa was sent off.

The late strike completed a remarkable turnaround for a Uganda side that had been seven minutes away from suffering their first qualifying home defeat since 2004.

The result means the Cranes remain unbeaten and move top of Group J with eight points, two more than Senegal who play in Liberia on Sunday.

"Being a goal down in a World Cup qualifier and winning the match can benefit the team from so many angles, not just the three points," coach Micho Sredrojevic told BBC Sport.

"We are looking forward to the last game in this group stage against Senegal - we have over two months to work very hard, assess the situation and strengthen the team from all angles."

"We want to fulfil the dream of all Ugandans by going to the World Cup."

Uganda can qualify for the play-offs with victory in their away fixture against Senegal in September.

This first loss in the campaign for Angola - whose sole World Cup appearance came in 2006 - means they are now out of the running for next year's finals in Brazil.

Meanwhile, Mawejje capped a fine week after scoring the only goal against Liberia in Kampala last weekend.

Elsewhere on Saturday, Sierra Leone's 1-0 defeat in Cape Verde means Group B leaders Tunisia will reach the African play-offs should they avoid defeat in Equatorial Guinea on Sunday.

Nhuck scored the only goal after 12 minutes in Praia to move his side off the bottom of the group and up to second in the table.

Cape Verde's tally of six points is four fewer than Tunisia's however, with only Equatorial Guinea - who currently prop up Group B - still with a chance, albeit slim, of catching the 2004 African champions.