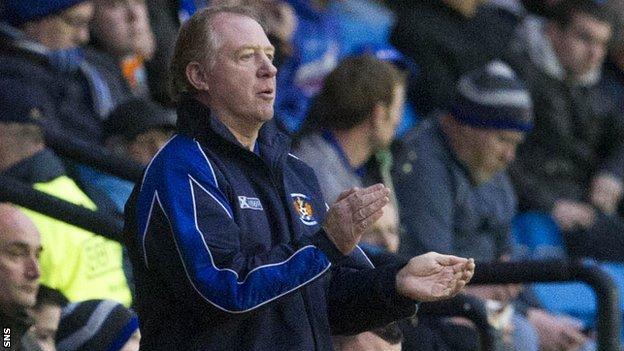 Kilmarnock assistant manager Jimmy Nicholl has left the Ayrshire club to take up the same role at Hibernian.

The Northern Irishman was assistant to

Killie chairman Michael Johnston revealed Nicholl had been a candidate for the manager's post but insisted the 56-year-old's exit was amicable.

"Jimmy told me he wanted a fresh start and would be accepting the job offer from Hibs," he told BBC Scotland.

"I made him aware that he was a candidate to become our next manager, but he wasn't comfortable with his perceived uncertainty here and has chosen to move on."

Nicholl will become assistant at Easter Road to Pat Fenlon, who confirmed the appointment on Hibs' website.

When Pat spoke of his plans for the club, it was an easy decision for me

"I am delighted to have such an experienced coach as my assistant," he said.

"Jimmy has a deep knowledge of the game and of Scottish football in particular and will be a great asset to the club.

"He is particularly good in the development of young players and this is another important factor for the club."

After a playing career which took in Manchester United, Sunderland and Rangers among others, Nicholl became player-manager at Raith Rovers.

He then became assistant manager at Northern Ireland before managing Millwall.

Much of his coaching career was as assistant to Jimmy Calderwood, with whom he spent 11 years at Dunfermline, Aberdeen and Kilmarnock.

A year after Calderwood departed Killie in 2010, Shiels brought Nicholl, who had just resigned as Cowdenbeath manager, back to Rugby Park.

Nicholl added: "When Pat spoke of his plans for the club, it was an easy decision for me.

"I am delighted to be his assistant and hope to contribute to the on-going development and success of one of Scotland's leading clubs."

Hibernian said in a statement that they were "grateful to Kilmarnock for confirming Jimmy Nicholl's availability to join Hibernian".