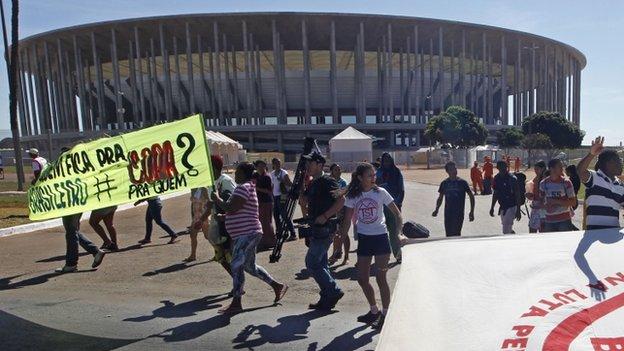 Fifa is confident the opening match of the Confederations Cup will go ahead as planned in Brasilia on Saturday, despite protests outside the stadium.

Around 200 activists blocked the main road outside the newly built venue and set fire to mounds of tyres.

The protests were from groups unhappy at the amount of public money spent on the tournament and 2014's World Cup.

But a Fifa spokesman said the governing body had total confidence in local authorities to deal with the issues.

Brazil play Japan at the Mane Garrincha stadium in the country's capital on Saturday, but Pekka Odriozola told BBC Sport that while Fifa supported the protestors' right to free speech, they were monitoring the situation, and were in constant contact with local officials.

More protests are believed to be planned for Sao Paolo, Belo Horizonte and Rio in the coming days.

Much of demonstrators' anger and frustration is aimed at the billions of pounds being spent on new stadiums, which they feel would be better spent on solving the chronic poverty in many of Brazil's major cities.

Protests have been on the rise in Brazil in the past week. On Thursday, members of the Free Pass Movement clashed with police in both Sao Paulo and Rio over the rising cost of public transport.