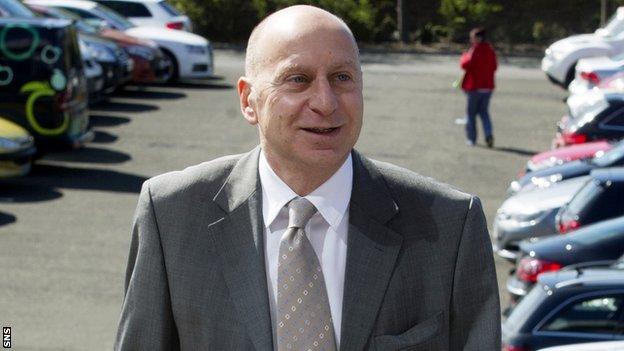 The administrator of Dunfermline, BDO, has set a deadline of Tuesday 18 June for interested parties to make an offer for the Fife club.

After the 19 June closing date for offers, BDO's Bryan Jackson will meet creditors to propose a creditors voluntary arrangement.

There are two potential buyers,

There is also interest from a party who have asked BDO to remain anonymous.

Any sale would be somewhat complicated by the arrangement of the club and stadium East End Park being sold as separate entities, with both currently being run by different administrators.

However, Jackson believes this should not impede the progress of moving the club into the hands of new owners as KPMG, the administrator of East End Park holdings, want a deal to progress.

A CVA will be successful if 75% of creditors vote in favour and a provisional date of 12 July has been set for such a vote when BDO would offer a pence in the pound deal to those owed money by the Pars.

Dunfermline entered interim administration in March after facing a winding-up order over a £132,000 tax bill. Full administration was granted in April.

The club were docked 15 points by the Scottish Football League and finished season 2012-13 second bottom in the First Division.

And, despite winning the promotion/relegation play-off semi-final against Forfar Athletic, the Pars' relegation to the Second Division was confirmed when they were beaten over two legs by Alloa Athletic in the final.

The First Division outfit had been granted interim administration last month after facing a winding-up order over a £132,000 tax bill in February.