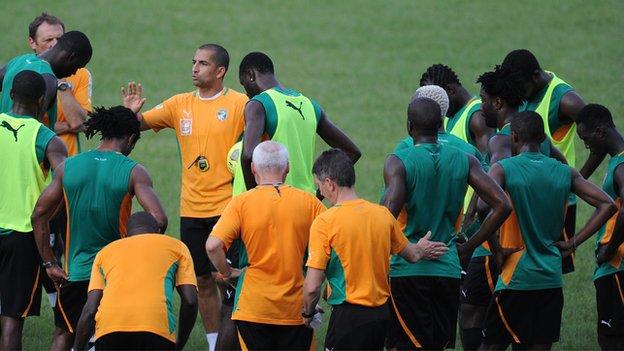 Ivory Coast and Egypt are among five nations who can qualify on Sunday for the African play-offs for the 2014 World Cup.

Victories will secure unassailable leads for the Elephants and the Pharaohs in their respective four-team groups, while Ethiopia and Tunisia are in a similar situation.

Amid countless permutations, even drawing might suffice for the Ivorians, Egyptians and Tunisians depending on the results of their closest challengers, but sharing the points would not take the Ethiopians through.

Egypt, seven-time African champions but with only two World Cup appearances, beat Zimbabwe 4-2 in Group G thanks to a Mohamed Salah hat-trick and visit Mozambique to face a team reeling from a six-goal hiding by Guinea.

Playing at the World Cup for the first time in 24 years has become an obsession for American coach Bob Bradley and his mix of ageing stars like midfielder Mohamed Aboutrika and younger ones like Salah.

The Pharaohs will be boosted by the news that Mozambique parted company with German coach Gert Engels just three days ahead of the match.

"We have amicably terminated the contract of coach Engels due to lack of progress in the team," secretary-general of the Mozambique Football Federation, Philip Johane, said.

The Pharaohs need one point to secure their qualification for the final round as their 12 points are five better than second-placed Guinea.

Among the top seeds in the 10 groups, 2010 World Cup hosts South Africa are under pressure in Addis Ababa on Sunday, where a home will take Ethiopia into the play-offs.

A country where Olympic gold medal-winning athletes have dominated domestic sporting headlines for decades, Ethiopia were the fourth seeds in Group A behind South Africa, Botswana and the Central African Republic.

However, there has been nothing fourth-rate about their displays and regular goals from Getaneh Kebede and Salahdin Ahmed have produced three wins, a draw and a two-point advantage over Bafana Bafana.

With Zambia having been held to a 1-1 draw by Sudan on Saturday, Ghana can go top in Group D with victory in Lesotho - and with captain Asamoah Gyan back in form up front, it is hard to imagine any result other than a win for the visitors in Maseru.

Regardless of the result in Lesotho however, the winner of the group will be determined when the Black Stars host the Chipolopolo, the 2012 African champions, in September.

Algeria are another country that could advance this weekend but they must win and hope that Mali stumble at home to Benin.

The Desert Foxes appear to have shaken off a disastrous Nations Cup and won 3-1 in Benin with Islam Slimani bagging a brace to be the five-goal leading scorer in the qualifying competition.