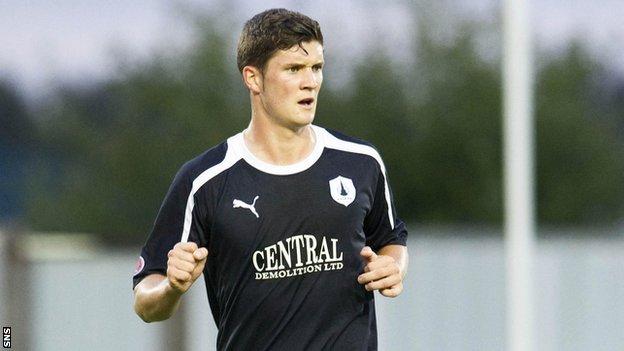 The 23-year-old came through the youth system at Falkirk Stadium and has made 88 appearances for the club, scoring seven times.

You can see how dedicated he is to his job. He is really ambitious and I think that's what he saw in us

"We kept an eye on him, watched him a few times and spoke to many people up in Scotland and the responses were positive," said boss Graham Alexander.

"I went to watch him myself and everything I saw was great to see."

Alexander has already enjoyed a busy summer in the transfer market as he looks to change around the squad that finished 13th in their first season in League Two.

Jeff Hughes,Steven Schumacher, Liam Hogan and Matty Blair have all arrived, while 12 players have been allowed to leave and another three placed on the transfer list.

"We had to fight off some competition to land him [Murdoch]," Alexander added. "He can get up and down the pitch like a good old modern midfielder.

"We've seen the power he has and the way he can pass a ball and he ticks all the boxes.

"When I've spoken to him, you can see how dedicated he is to his job. He wants to do well because he is really ambitious and I think that's what he saw in us."