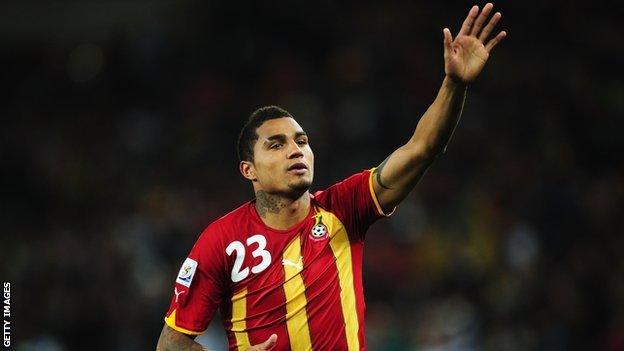 The Ghana Football Association says Kevin-Prince Boateng has made himself available to play for Ghana again.

The 24-year old retired in November 2011 claiming his body could not cope with club and international football.

"Before Ghana played Sudan he had confirmed to the coach he was coming back to play", GFA president Kwesi Nyantekyi said on South African TV.

"Unfortunately he got injured during training with AC Milan and so could not make it."

He has not played for Ghana since an Africa Cup of Nations qualifier against Congo in October 2010.

Boateng who has Ghanaian and German parentage switched his international allegiances to Ghana in time for the 2010 world cup after persistent snubs by Germany.

He then went on to play a major part in Ghana's run to the quarter-finals of the before announcing his retirement from international football after only nine caps including just one game on Ghanaian soil.

That decision triggered an angry response with many Ghanaian fans accusing him of riding on the back of the country to international fame at the world cup.

His decision to return comes days after the Ayew brothers, Andre and Jordan also announced an end to their international retirement.

Nyantekyi says the developments are positive for the Black Stars who are locked in a battle with Zambia for top spot in group D of the 2014 world cup qualifying.

"Our position has not changed - we think we need all the best players available to make themselves available for the Black Stars," Nyantaki added.

"If we have the Ayews, K-P Boateng, Michael Essien to join the squad that will make it formidable, even capable of winning the world cup."

Boateng could now make his return in September when the Black Stars host Zambia in what could prove to be a winner-takes-all 2014 World Cup qualifier in Kumasi.