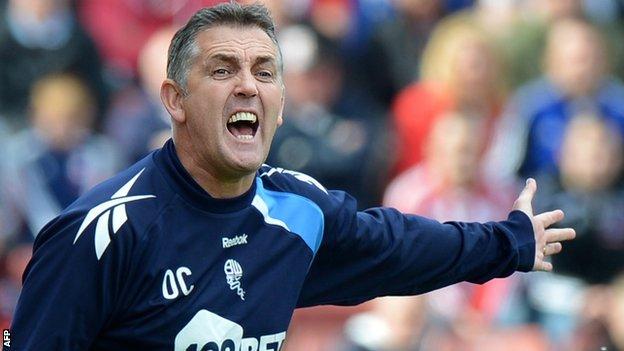 Former Burnley and Bolton Wanderers boss Owen Coyle has been appointed as the new manager of Wigan.

The 46-year-old Scot succeeds Roberto Martinez at the DW Stadium, after the Spaniard joined Everton.

Six months after leading Burnley to the Premier League in 2009, Coyle left for Bolton, who sacked him five months after they were relegated in 2011-12.

Wigan dropped into the Championship last season but May's FA Cup win saw them qualify for the Europa League.

"It's unusual to be FA Cup winners and in the Europa League, but Wigan have lost their place in the Premier League. That's a huge blow," Coyle told BBC Radio 5 live.

"The aim is to get back into what I consider to be the best league in the world at the earliest opportunity. We will do everything in our power to do that."

Latics chairman Dave Whelan, 76, had confirmed to BBC Sport a deal in principle had been agreed and a club statement said that Coyle will start work "immediately" and be presented to the media early next week.

Speaking before the appointment was announced, Whelan told BBC Sport: "I've told him returning to the Premier League is the total and utter priority.

"It's fantastic that we are in Europe but that comes second and he knows that the Premier League is where we have to be.

"It's been no easy task but Owen has shown enthusiasm and passion from the moment I met him. He's been there and done it with Burnley.

"He wasn't so successful at Bolton but he had a lot of injuries and bad luck. People forget that. You need luck at times but he's certainly got the passion, energy and enthusiasm I was looking for."

Wigan midfielder James McArthur tweeted: "Happy with the new appointment in Owen Coyle, another Scot. Hopefully everyone can get behind him and the team for new season."

Coyle took over at Bolton in January 2010, six months after guiding Burnley to the Premier League and subsequently signing a contract extension at Turf Moor.

The Trotters went on to survive a relegation battle while Coyle's former employers went down.

In 2010-11 Bolton reached the semi-finals of the FA Cup and finished 14th after spending much of the season in the top half of the table, but in 2012 they were relegated, ending an 11-year spell in the top flight.

Coyle, who has also managed St Johnstone and Falkirk, was sacked in October 2012 with Bolton 18th in the Championship after winning only three of their first 10 matches.

"When you get a bloody nose, you come back fighting again," Coyle added. "I'm really invigorated and ready to go to get Wigan Athletic back into the Premier League."

The former Bolton striker made one appearance for the Republic of Ireland and played for a host of teams in Scotland.

Martinez, 39, was given permission to leave Wigan in late May after leading the Latics to a historic FA Cup triumph, although he could not prevent their relegation from the Premier League.

He was then named as David Moyes' successor at Everton on 5 June, with Moyes taking over from Sir Alex Ferguson at Manchester United after 11 years at Goodison Park.

Under Martinez, Wigan finished 16th twice and 15th, before slipping to 18th this season.

Former England manager Steve McClaren had been heavily linked with the vacancy at the DW Stadium before Coyle's appointment.