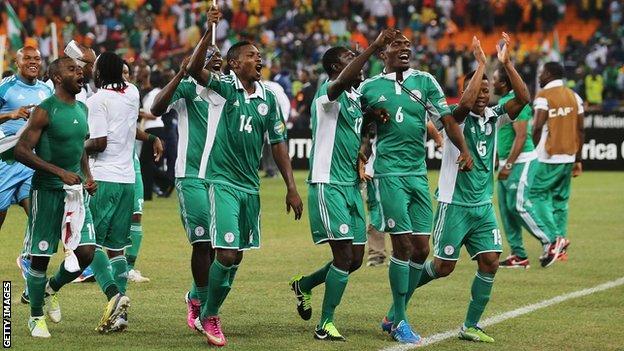 Nigeria will play in the Confederations Cup in Brazil next week after a dispute about bonus payments was settled.

The Super Eagles will leave Namibia for South Africa on Saturday and fly to Brazil the same day after calling off a threatened strike.

The row was settled following the intervention of the country's sports minister Bolaji Abdullahi.

"It's been resolved and we will land in Brazil by Sunday," one of the players told BBC Sport.

"The whole issue has been resolved and we can now concentrate on the Confederations Cup.

"We are now hoping that the government live up to their promises and pay us once we get to Brazil."

The Nigeria Football Federation's general secretary Musa Amadu said in a statement: "We are shocked, like every Nigerian, at the attitude of the players.

"It is incomprehensible because the NFF president Aminu Maigari and myself sat down with the management of the Super Eagles, including coach Stephen Keshi, to explain why we had to slash the bonus and other measures taken as a result of our financial constraints."

Amadu said the squad would travel to Brazil on Saturday, giving the team only one day to train before their opening match against Tahiti on Monday in Belo Horizonte.

The Nigerian players had refused to leave their hotel in Namibia on Thursday and missed their scheduled flights to Brazil, after a World Cup qualifier on Wednesday.

They were angry over unpaid bonus money promised to them after they beat Kenya 1-0 in a World Cup qualifier last week.

The players wanted to be paid £6,370 ($10,000) but the cash-strapped Nigeria Football Foundation, which has been forced to cut back on backroom staff of the various national teams, refused.

The Nigerian players had then been offered a bonus £1,590 ($2,500) following their 1-1 draw in Namibia in another World Cup qualifier on Wednesday, but the players wanted more.

Nigeria are also set to play Uruguay in Salvador on 20 June and then Spain in Fortaleza on 23 June at the Confederations Cup.