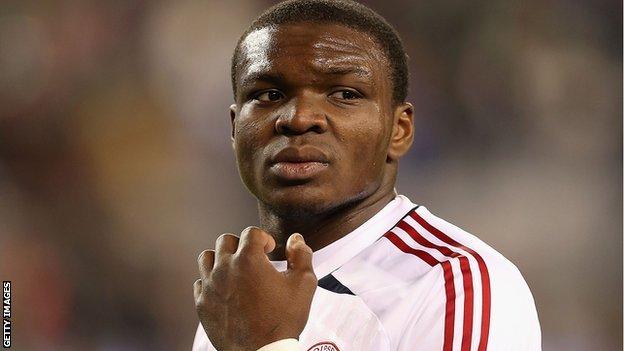 Okore, 20, has made seven appearances for his country and joins from Danish side Nordsjaelland on a four-year contract.

Bacuna, 21, arrives from Dutch side Groningen on a three-year deal.

Villa have also given midfielder Daniel Johnson, 20, a new two-year contract, tying him to the club until 2015.

Leandro's another player we believe will do well for us. He has played in big games and he has lots of experience for a player so young.

"Jores is only 20 years of age and that's good but he's also an international player at a really young age and he's played Champions League football as well," said Villa boss Paul Lambert.

"I'm pleased that we've signed a player of his stature. He is someone who can come in and make a huge impact.

"He has played in big games but he's a very humble lad and he will be a really good addition to our team. There's a great opportunity for him here."

"Leandro's energy and versatility will be really good for us," said Lambert.

"He's another player we believe will do well for us. He has played in big games and he has lots of experience for a player so young."

This summer Villa have already agreed to sign Bulgarian winger Aleksandar Tonev and are currently negotiating a deal for Danish striker Nicklas Helenius.

He is yet to make his full first-team debut but has been a regular for the reserves and also had a but was sent back to Villa Park a week early.