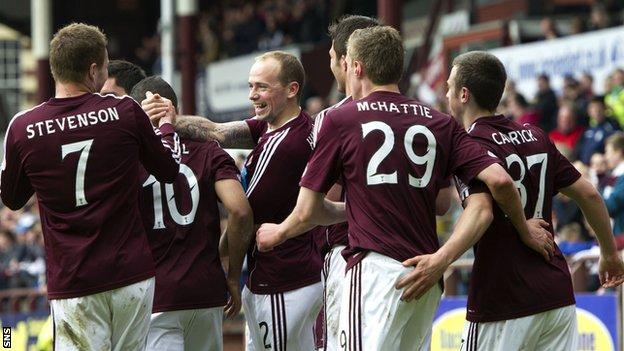 Hearts will listen to offers for their entire first-team squad in an effort to keep the club afloat.

The Edinburgh club said it was the result of other revenue "drying up", with season ticket sales about half what they were last year at this time.

Managing director David Southern told BBC Scotland it is doubtful they will be able to pay players' wages that are due at the end of this week.

Hearts need to raise a "significant six-figure sum" before the weekend.

The board had planned to bring income in through the sale of players while considering the financial forecast for next season, but now this will need to happen much earlier in order to preserve the business

The club faces uncertainty with a debt of £25m - £10m of which is due to their parent company, UBIG, which is claiming insolvency.

Hearts' majority shareholder, Vladimir Romanov, who claims to have spent £60m on the club, is seeking a buyer for the Scottish Premier League outfit.

In a statement, the club said: "It is now crucial to the football club that we find a solution to bring in enough finance to allow us to trade into the new season when normal trading can resume with the benefit of SPL and game-related income streams.

"The payments to HMRC and players/staff salaries are the most important issues in our focus these days where very limited time remains available to the club.

"However, given that the revenues for season tickets has dried up and no other realistic income is available quickly enough, the club will consider offers for the players of the current squad, including the most promising talent in order for the most necessary and important payments to be made."

Hearts have had assurances from the administrator handling Ukio's liquidation that he wishes to keep the football club as a going concern.

However, the club says the resulting uncertainty has led to the club's main source of revenue in the close season - the sale of season tickets - drying up, with around 6,500 being sold so far, leading to problems in .

"Due to recent unexpected circumstances away from Tynecastle, the club is now experiencing a shortfall in funding," said the club statement.

"This shortfall, due to recent uncertainty, has created a significant noticeable blockage in projected revenue streams for the club.

"While this hesitation is understandable, it is unwittingly damaging the club's current efforts to improve its financial situation, including current payments to HMRC and raising doubts over future payments to players and staff.

"The board had planned to bring income in through the sale of players while considering the financial forecast for next season, but now this will need to happen much earlier in order to preserve the business."

Hearts say the financial problems have resulted from their worst league finish in more than 30 years, the absence of Rangers from the SPL and increased costs relating to the Main Stand.

"Provided we can achieve security for the club, it is the view of the board that there is a viable strategy for the change of ownership to a willing buyer or investor," they add.