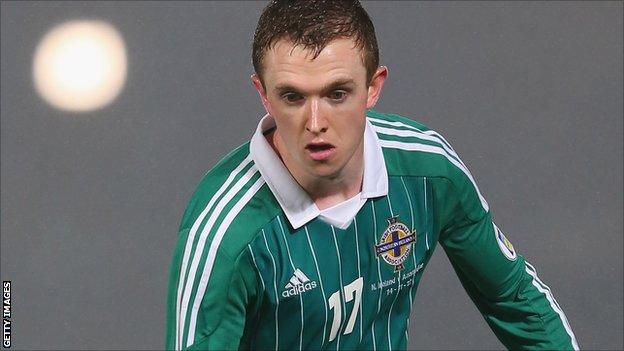 Derry-born Ferguson has won eight caps and scored once since his international debut against Italy in June 2009.

"He's at an age now where he needs to play," O'Neill told BBC Newcastle.

Capable of playing at full-back or wide left of midfield, Ferguson made his Newcastle debut in August 2010, but has found chances limited by signings such as Davide Santon and Massadio Haidara as well as the form of Hatem Ben Arfa.

O'Neill continued: "Certainly going out to Birmingham was a bonus for him, he was getting games and was on the fringes at Newcastle before the transfer window opened and then an influx of new players made it more difficult for him to make the breakthrough.

"From his point of view he just wants to continue playing, when he goes back to Newcastle he'll hope to be making inroads into the first team again.

"If not then he'll probably look at his options with regards to going out on loan and playing elsewhere."

"Shane has been a player who wasn't involved at international level prior to me coming in, I introduced him to the squad and we liked him straight away," he added.

"He's a clever player, a sharp player in possession and has a lot of really good attributes.

"He's not that big and physically strong, people might hold that against him but he's got a great manipulation of the ball and really good game intelligence."