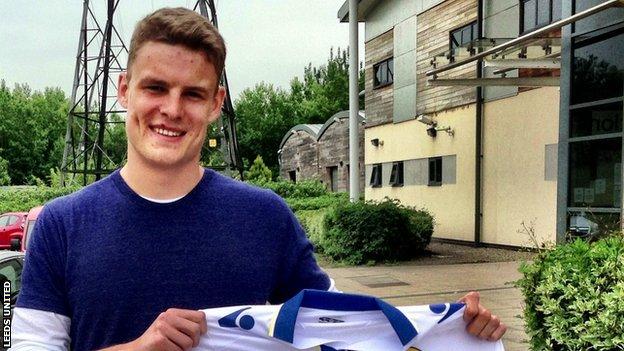 Smith played non-league football while a University of Manchester student before joining Oldham in 2011.

The 24-year-old told BBC Radio Leeds: "It's an unorthodox route which is very different to most footballers.

"It gives you a different perspective, I know how privileged I am and that I have to work very hard."

Smith shares an agent with Sheffield United's Dave Kitson, a striker bought by Reading at McDermott's suggestion when he was at the Berkshire club, and who enjoyed considerable success with the Royals.

"The similarities between my story and Dave's story are there, so maybe he sees me as a prospect like Dave was when he came from Cambridge to Reading, and hopefully I can be as successful," said Smith.

"Having worked outside football, it makes you understand how privileged you are to be doing something you love outdoors, being paid to keep fit.

"I understand most jobs don't finish at 1.00pm and that most people don't get paid thousands of pounds a week."

Smith made headlines last season by scoring against Liverpool and Everton during Oldham's run to the fifth round of the FA Cup.

He scored 14 goals in 75 games for the League One club after joining them from Solihull Moors in May 2011.

And he has told McDermott he is not moving to Elland Road to "make up the numbers".

The International Management with American Studies graduate added: "I'm very dedicated and hard-working and obviously I want to play.

"But I'm not misguided, I know it's a very strong squad with competition all over the pitch.

"I have to knuckle down and work extra hard - as I did at Oldham - and try and force myself into the team."