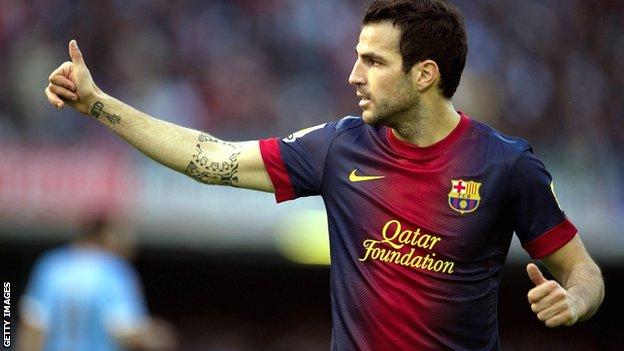 Barcelona midfielder Cesc Fabregas has dismissed reports linking him with a return to England as "absurd".

The 26-year-old rejoined the Catalans in 2011, but Manchester United and ex-club Arsenal are believed to want to lure him away from the Nou Camp.

"I've always said that I'm happy at Barca. Whoever says that I'm leaving doesn't know me and has never spoken with me," the Spain international said.

"If someone says I don't want to play at Barca, it's completely absurd."

Fabregas came through the youth ranks at Barcelona from the age of 10 until 16, when he signed for the Gunners.

He made 303 appearances for the Londoners in eight years, scoring 57 goals, and became the club's youngest player when he lined up against Rotherham United aged 16 years and 177 days in a League Cup match in October 2003.

Last season Fabregas started 30 of Barcelona's 38 league games but was substituted on 16 occasions, while in the Champions League he was in the starting line-up for six of the team's 12 games and was taken off three times.

This led to rumours he was unsettled with the La Liga champions but in an interview with Spanish newspaper Marca, Fabregas insisted his future remained at Barca, adding: "My agent knows that I don't want him to talk with other people about me."