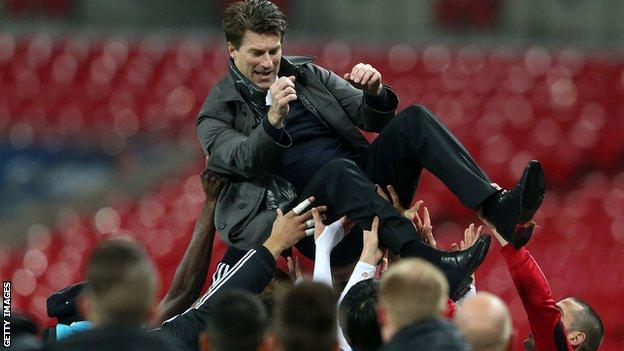 Michael Laudrup says he intends to stay at Swansea City, despite the club falling out with his agent.

Doubts over Laudrup's future arose when the club following a dispute over transfer policy.

But Laudrup told the South Wales Evening Post: "I have repeated it so many times in the last three months. My intention is to stay."

He added: "Bayram is my agent and that's not going to change."

Laudrup's future was already uncertain due to a dispute over transfer funds before the club confirmed they had cut ties with his agent.

Club sources have accused Tutumlu of trying to dictate transfer policy, with one particular point of contention being the agent's involvement in the potential sale of Wales defender Ashley Williams.

Chairman Huw Jenkins is believed to have told Tutumlu that he has no intention of allowing Williams, who has been linked with Arsenal and Liverpool, to leave the Capital One Cup winners.

Tutumlu has represented Laudrup, 48, since he was a Barcelona player. The Dane said the arrangement would not change.

"The only thing I care about is to have the best players possible at Swansea who are within range of the economy of the club.

"It will not change my relationship with Bayram one centimetre.

"The only thing I am interested in is having the best players at Swansea within the budget that is possible.

"That's what I have been fighting for every day, last year when I arrived and this year as well. That will always be the most important thing for me wherever I end up in the future."

It is understood Jenkins remains in contact with Laudrup and that the former Juventus and Real Madrid player has offered up a fresh list of potential transfer targets, having seen a number of players he previously asked to sign go elsewhere.

Laudrup, who signed a contract extension with Swansea in March, has been linked with clubs all over Europe in recent weeks,

Roma and Fenerbahce are the latest possible destinations, but the Dane has also been linked with Real Madrid, Barcelona, Malaga, Paris St-Germain and Monaco.