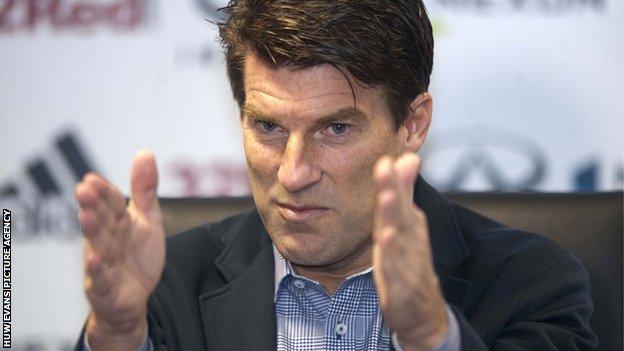 Michael Laudrup's future at Swansea City appears to be in doubt after it emerged the club has cut all ties with his agent, BBC Wales Sport understands.

One particular point of contention is the agent's involvement in the potential sale of Wales defender Ashley Williams.

Laudrup's future was already uncertain due to a dispute over transfer funds.

The Premier League club are understood to have decided to have no more involvement in any transactions or dealings with players involving Tutumlu.

Tutumlu has known Laudrup since he was a Barcelona player and the latest disagreement appears to make the Dane's position at Swansea even more tenuous, given the close ties between the two men.

Chairman Huw Jenkins is believed to have told Tutumlu that he has no intention of allowing Williams's move out of the Liberty Stadium.

Laudrup has reportedly reiterated his desire to stay with the Swans and his daughter has taken to Twitter to say likewise.

It is understood Jenkins remains in contact with Laudrup, 48, and that the Dane has offered up a fresh list of potential transfer targets, having seen a number of players he previously asked to sign go elsewhere.

But it is doubtful whether any of those players will arrive given the breakdown in relations between Tutumlu and the Swansea board.

Laudrup has been linked with clubs all over Europe in recent weeks, with Roma and Fenerbahce the latest names mentioned, but he has also previously been linked with the jobs at Real Madrid, Barcelona, Malaga, Paris St Germain and Monaco among others.

Laudrup only signed a contract extension with Swansea in March and has stated his "intention" to stay in charge at the Liberty Stadium next season.