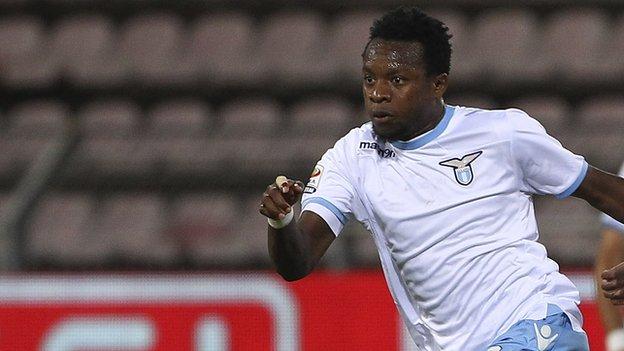 Nigeria's Ogenyi Onazi has been ruled out of the Confederations Cup in Brazil because of a knee injury.

The Lazio midfielder, 20, suffered the injury during the Super Eagles' 1-1 draw in their World Cup qualifier against Namibia on Wednesday.

"I thought it was something I could manage when it happened but there was no point pushing myself to the extreme," Onazi told BBC Sport.

"Unfortunately, it means I will miss our Confederations Cup in Brazil."

After undergoing a scan on Thursday, Onazi told BBC Sport he will be back in action in about a month's time.

He added: "I'm very disappointed because I always want to give my best for my country.

"Sometimes you face something like this to be stronger as a player. I can only wish my teammates well in Brazil."

Onazi's absence is a huge blow to Nigeria, who are already without Emmanuel Emenike, Victor Moses and Kalu Uche for the 15 -30 June tournament.

Coach Stephen Keshi said: "There's no denying the fact that we'll miss Onazi because he's an important player, he is the engine room of that midfield and this tells you how important he is to the team team.

"This is football and we have to be without him. The young boy is dedicated, committed and level headed on and off the pitch.

"I know we can find another player in the squad who will step up and fill that void."

The African Champions will face Tahiti, Uruguay and Spain in Brazil in the tournament which doubles as preparation for the South American country for the hosting of next year's World Cup.

The Super Eagles finished fourth in their maiden Confederations Cup appearance in Saudi Arabia in 1995.