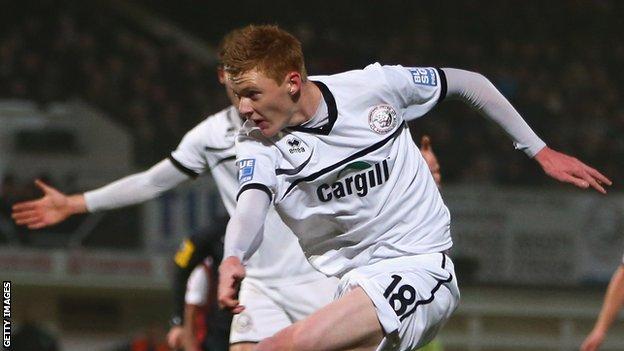 Hereford United midfielder Sam Clucas has turned down an offer from League One side Crewe Alexandra to play at the level below for newly promoted League Two club Mansfield Town.

Clucas has moved to Field Mill on a two-year deal, with the fee to be decided by a tribunal.

But Crewe have been left frustrated at being unable to afford the 22-year-old.

"But it's something we've got accustomed to. We lose and we move on."

Mansfield insist, however, that Clucas's decision to move to Field Mill is based more on the fact that, having resided in digs in Hereford last season, living in Nottinghamshire will keep him closer to his family home in Lincoln.

Clucas, who joined the Bulls from the Glenn Hoddle Academy in 2011, had been offered a new contract at Edgar Street.

But he impressed the Stags when he played against them for Hereford in the penultimate fixture of the season, just five days before Mansfield were crowned Blue Square Bet Premier champions.

He scored nine goals in 62 appearances for the Bulls - five of which came in the last six games, to help trigger his end-of-season exit.