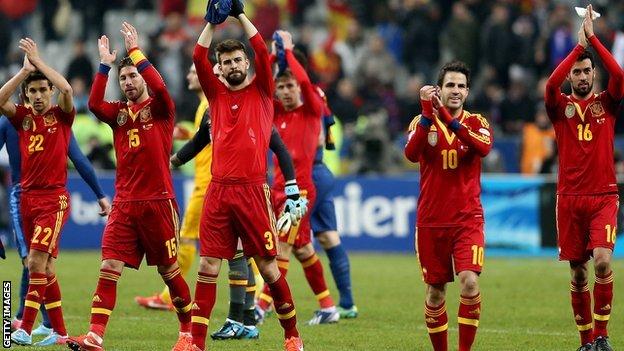 There seems to be no stopping Spain.

Despite some resistance from the Republic of Ireland at the Yankee Stadium, they outgunned Giovanni Trapattoni's men 2-0 in their last game before the Confederations Cup campaign gets under way in Brazil this weekend.

On Sunday, the world and European champions play their first group game against Uruguay, as La Roja begin their bid to bring yet another international trophy back to Madrid.

Spain have run out of plaudits to describe Vicente del Bosque, the serene master tactician who is their longest-serving head coach.

The only man to win the coaching treble of the Champions League, World Cup and European Championship, he was made the First Marquis of Del Bosque, a Spanish nobleman, by King Juan Carlos after Spain's 2010 World Cup triumph. His contract expires next summer.

Read the rest of the team guide

It is difficult to pick holes in Spain's system. There is a sense, perhaps, that their stars might be out on their feet, epitomised in the manner in which Barcelona, in particular, were overrun, 7-0 on aggregate, by Bayern Munich in the recent semi-finals of the Champions League. Barca's Xavi and Andres Iniesta looked like tired men.

Real Madrid's playmaker Xabi Alonso, who is injured at present, was eclipsed in midfield as his side lost on aggregate to Borussia Dortmund in the other semi-final.

If Spain's midfield axis is suffering from fatigue, their obligations with the national team haven't helped. Since winning the World Cup in 2010, the Spanish Football Federation has undertaken a schedule of exhausting, money-spinning friendlies.

In the last year alone, while many of their counterparts have stayed on the European continent to play matches, Spain's squad have been long-hauling it to the likes of Qatar, Puerto Rico and Panama.

They got 3m euros for their tie against Panama last November, a game that involved a six-hour time difference, heat and humidity, and which, in the words of Barcelona's Cesc Fabregas, "served no purpose".

Spain manager Vicente del Bosque concedes that his players endure long, intense seasons with their clubs, but winning, of course, and competition for place provides a useful tonic for alleviating weary limbs and minds.

As a measure of the country's riches, Spain's bench for last year's 4-0 win against Italy in the European Championship final (their second Euro title in a row) included Chelsea's Juan Mata, Arsenal's Santi Cazorla and Javi Martinez - who was arguably Bayern Munich's most influential player in the closing stages of its successful Champions League campaign this season - as midfield options.

Spain's game is modelled on the Barca notion that football is a game of midfielders, a strategy taken to extremes against Italy in that final, as Del Bosque started the game with six midfielders and no strikers.

Against Ireland on Tuesday night, Del Bosque played with a recognised striker, recalling David Villa, Spain's all-time top scorer, to fill the No 9 role. Villa was withdrawn in the second half for Valencia's Roberto Soldado, who struck an opportunist half volley to open the scoring.

Neither of the pair, or Fernando Torres who has lost his mojo since joining Chelsea, fully convinces Del Bosque, however. He favours a false No 9, such as Manchester City's sorcerer-in-chief David Silva or Fabregas, admitting the country doesn't have "a decent No 9" at present.

"As a rule, every team should play with a No 9 but we haven't found one we all like - maybe that's our fault," Del Bosque said in a media conference last week. "A few have been given run-outs - (Sevilla's Alvaro) Negredo, Torres, Soldado… Villa hasn't really bowled us over either.

"A striker can spend practically the whole game without having to touch the ball, then score a goal and everyone says, 'well, anyone could have scored that'.

"But he has spent the whole match without a sniff of the ball. We need players up front who participate - ones who are visible and actively taking part during the game."

The striking thing about Spain's "active" players, the team's wonderful playmakers - Xavi, Iniesta, Silva, Cazorla, Mata, who scored the late, second goal against Ireland - is their small stature - they average 5ft 7in in height. Size doesn't matter in Spain's football academies; the ability to hog the ball is prized above all.

"People used to think that the Spanish type of player - small, skilful, technically good - at the professional stage would not make it," says Fernando Hierro, who won 89 caps for Spain and is a former sporting director of Spain's football federation.

"However, now that we've won three big titles, the world loves these types of players and says: 'Hey, look how well these people play football.'"

There are significant cultural factors that feed into the Spanish type of play. Tackling, an art form that is cherished by British football coaches and fans, is disdained in Spain.

In an interview before Spain's friendly match against England at Wembley in November 2011, Alonso, who spent five seasons at Anfield, made the point forcefully.

"I don't think tackling is a quality," he said. "It is something you have to resort to, not a characteristic of your game. At Liverpool, I used to read the match-day programme and you'd read an interview with a lad from the youth team.

"They'd ask: age, heroes, strong points, etc. He'd reply: 'Shooting and tackling'. I can't get it into my head that football development would educate tackling as a quality, something to learn, to teach, a characteristic of your play.

"How can that be a way of seeing the game? I just don't understand football in those terms. Tackling is a (last) resort, and you will need it, but it isn't a quality to aspire to."

Spain's football model is an inversion of what other nations do: it gets its senior team to replicate the 'tiki-taka' (short passing) brand of play of its youth teams, according to Hierro. The strategy helps youngsters, he says, to make the path towards senior level.

"For example, if our Under-17s national team goes to England to play its under-17s team, you'll see the Spanish boys have a style of play like the senior national team. They have the same features, the same possession-based style of game.

"We can win or lose that particular match, but what we want is that you can imagine those 17-year-old players playing in the senior national team and you think: 'They play just like the seniors do.'"

Chances are that the Spaniards would win that hypothetical encounter. Spain are without equal at youth international football level, having won eight European under-17 titles, more than any other country.

They are the current holders of the continent's under-19 and under-21 crowns, and the bookies' pre-tournament favourites to retain their European Under-21 Championship trophy in Israel this month.

They face Norway in the semi-final on Saturday, having outwitted Germany - vaunted of late for its youth development - in the pool stages. They out-passed the Germans 709 to 314.

It seems the reign in Spain is set to continue for a while longer.