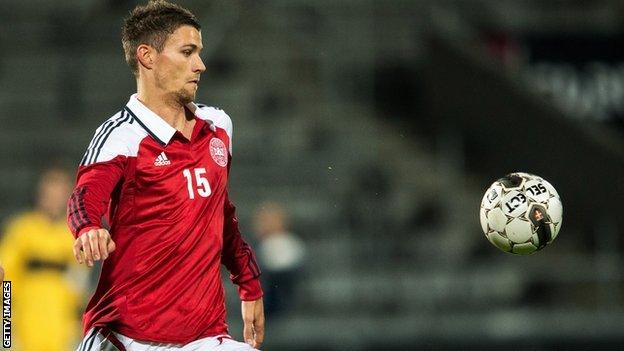 Aston Villa have signed striker Nicklas Helenius from Aalborg for an undisclosed fee on a three-year deal.

"Nicklas is a young lad but also a full international with a good goalscoring record in Denmark. He'll prove himself in the Premier League," Lambert said.

I want to show the fans that I'm hungry for this and that I'm very proud to be a Villa player.

"The chance will be there for him, as it will be for the rest of the lads."

Helenius has scored scored 29 goals in 55 league appearances during the past two seasons for Aalborg.

He has two caps for the Denmark team, making his debut against Slovakia last August.

"He has all the attributes to go and take it," added Lambert.

"He wants to go and make a name and a career for himself and he's made a good start at Aalborg. It's a case of continuing to work hard and building on that and I believe he can.

"He's a good player and the potential is there for him to grow into the team and grow with the team. He'll definitely be able to give the team a hand."

Aalborg are coached by former Villa centre-half Kent Nielsen, who spent two seasons with the Birmingham club after being brought to England by Graham Taylor in the summer of 1989.

"I learnt a lot over the past few seasons with Kent Nielsen as my manager," said Helenius. "He was a player here at Villa and, while I have always been a good finisher, he taught me to be more aggressive and determined when I don't have the ball. He showed me how to work hard and this will help me in this league.

"I thought that maybe when I was 28 or something I might eventually be able to move to the Premier League having made my mark in Danish football but now I have my chance and I think this is the right club for me with all the other young players in the side who want to do well and achieve something together.

"I want to show the fans that I'm hungry for this and that I'm very proud to be a Villa player."