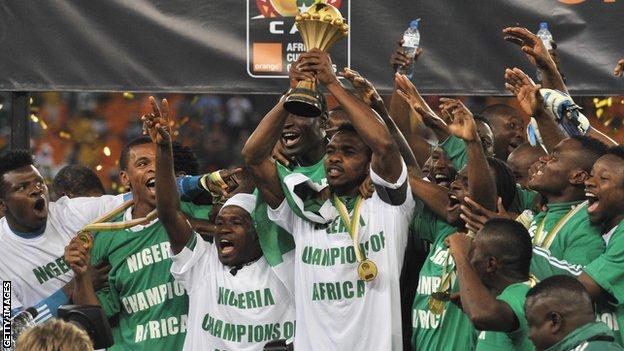 Nigeria drew 1-1 with Namibia in their World Cup qualifier to set up a group decider against Malawi for a place in the play-offs for the 2014 tournament.

The African champions needed a win to take an unassailable four-point lead in Group F with one game to play.

But the Super Eagles were lucky to get a point when Godfrey Oboabona equalised with seven minutes remaining.

Nigeria will now switch their focus to the Confederations Cup in Brazil, with their World Cup decider against Malawi not taking place until September.

The African champions face Tahiti on 17 June in Group B, followed by Uruguay and world champions Spain.

A draw was a solid result for Namibia - who are ranked 30 places below Nigeria and can now no longer qualify for Brazil - given their difficult build-up to the game.

The Swede quit, citing death threats against his family.

Earlier in the day, Malawi conceded a late equaliser at home to Kenya. The Flames sit second in Group F on seven points after their 2-2 draw - two points behind Nigeria.

The game had started well for Malawi as they opened the scoring through Robin Ngalande but it was a lead that did not last long, Kenya hitting back with a goal by Jamal Mohammed only five minutes later.

And although the Flames regained the lead through Robert Ngambi's 80th-minute strike, they could not hold out for the last 10 minutes and conceded in stoppage time when Moses Chavula scored a late own goal.