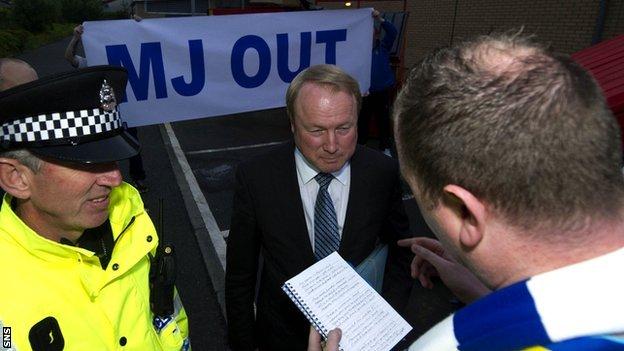 The only thing missing from the statement Kilmarnock issued to confirm they had removed Kenny Shiels from the manager's position was his middle name.

Stating "Mr Kenneth Shiels" had his contract terminated was taking formality to the extreme.

It looked like a final attempt to undermine the man who, only 15 months earlier, had led the club to League Cup success.

While some within the Rugby Park club feel his outspoken nature is the main reason Shiels is now in possession of a P45, recent statements from the club pointed towards poor results.

Statistics can be used as suits best.

That Killie had suffered its poorest home record in more than 30 years was aired, but there was no mention of having the third-best away record in the division, or the way Shiels has nurtured young talent in desperate financial times.

Kilmarnock finished ninth in the Scottish Premier League last season, their worst in three years. But this is a club which budgets to finish seventh and has a debt of £9.8m.

If Shiels's opinions were getting him into trouble was it not the responsibility of his boss, the chairman Michael Johnston, to nip it in the bud earlier?

Only when the Scottish Football Association cited the club for breaches of their regulations, by not controlling their employee, did matters surrounding the manager pick up pace.

However, playing out Shiels' eventual departure in public was another embarrassing period for the club.

From the moment speculation started on social media over two weeks ago that there was doubt over the manager's future, the alarm bells started to ring.

But the soap opera that developed over the past five days has done nothing for the credibility of Scotland's oldest professional club.

Matters of this nature are usually done behind closed doors and only when a decision has been made is the outcome disclosed to the public.

Some will argue the right decision has been made. Shiels's big mouth has brought about his own downfall and the chairman and his management committee were correct to relieve him of his duties.

And Shiels's regular visits to SFA disciplinary hearings would have made his chairman uneasy and embarrassed, particularly considering he sits on committees within the governing bodies.

But others look upon the Northern Irishman's comments on a variety of subjects as a breath of fresh air for the Scottish game.

Shiels arrived at Kilmarnock as assistant to Mixu Paatelainen and helped develop the team into one of the most entertaining in the country with an easy-on-the-eye brand of football.

He will be remembered, though, as the manager who guided Kilmarnock to their first trophy in 15 years when they clinched the League Cup with a victory over Celtic at Hampden in March 2012.

He is never short of an opinion and he's not short of a middle name either.

For the record, it is Armstrong.