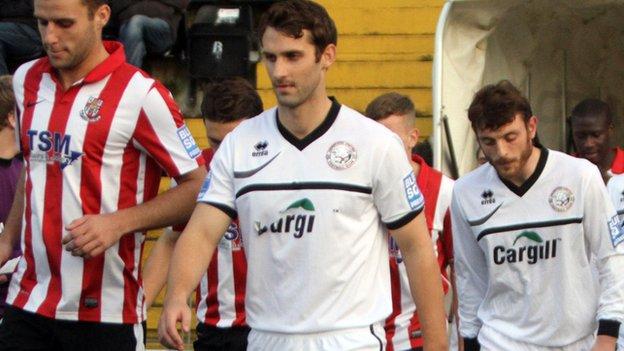 Hereford United captain Luke Graham has signed a new one-season contract that will also see him take on a coaching role at Edgar Street.

Graham, 27, rejected an approach from Conference Premier rivals Kidderminster Harriers to stay with the Bulls.

Foyle said: "Luke had a better offer from Kidderminster. But he had already given me his word he'd sign for us."

The Hereford manager revealed: "They were willing to pay a signing-on fee and a 52-week contract. But he kept his promise. That just sums up his attitude and character.

Harriers boss Steve Burr told their club website: "Luke Graham's agent got in touch with me and I did have discussions with him about a possible move to Kidderminster but at no time did we ever get down to the nitty gritty or any specifics of a contract.

"When I was told he had given his word to Hereford that he would sign there, I said that was fair enough and that I fully respected that - and it never went any further."

After starting last season without a club following his release by Southport, former Republic of Ireland Under-21 international O'Keefe, 24, hit an impressive 14 goals in 38 appearances following his arrival in September.

Liverpudlian McDonald, 21, has scored two goals in 11 appearances since being signed from Nantwich in February.

"It was important to get Josh signed on," said Foyle.

"He got plenty of goals last season. Getting a player who can score as many goals as he did from midfield is a hard thing to do.

"Rod had a taste of first-team football towards the end of last season and impressed me a lot. Now that Stefan Stam has gone I am sure he can replace him."

Hereford's latest three new deals gives them a total of five players signed up for next season, to compensate for this week's disappointment of losing winger Marley Watkins to Inverness Caledonian Thistle.