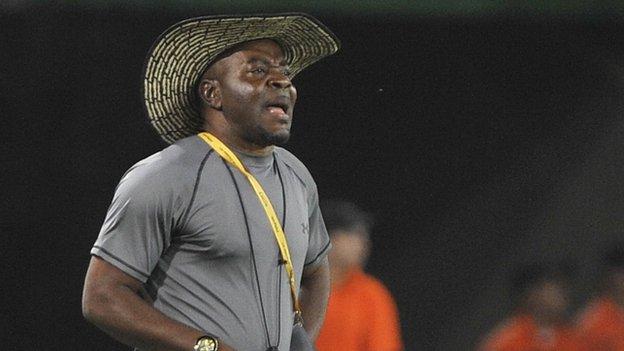 Nigeria coach John Obuh insists he has selected the best players for the Fifa Under-20 World Cup in Turkey.

Obuh has retained 16 players from the Flying Eagles squad that finished third at the African Under-20 Championship in Algeria in March.

The six-time African champions have come under severe criticism after they finished in eighth place at last week's ten-nation Toulon tournament in France.

Despite critics requesting an overhaul, Obuh has named an experienced squad.

The side has three Europe-based players, and the coach says he has strong faith in his team.

"We have to go to the World Cup with mostly the players from the African Youth Championship," under-fire Obuh told BBC Sport.

"I believe in these players, they have proved themselves again and again.

"We got the chance to watch both Portugal and South Korea [in the Toulon tournament] and even played against Portugal in a group game.

"They are both good teams but we hope to be at our best in Turkey."

With some calling for his dismissal with barely a fortnight to the championship, Obuh is taking the loud criticism in his stride.

"Football is a very passionate sport and we should expect criticisms whether they are fair or not," he said.

"In France, we tried some of the new players ahead of the World Cup before we finally named a final squad for Turkey.

"Our fans should please give them a chance."

Nigeria secured bronze at the African championship finals, with a 2-1 win over Mali in their third-place play-off match.

The West Africans, who have twice finished as runners-up in the Fifa under-20 tournament - in 1989 and 2005 - were knocked out by France in the quarter-final of the 2011 U-20 World Cup in Colombia.

Nigeria are in Group B of the World Cup, along with Cuba, Korea Republic and Portugal.

African champions Egypt are in Group E alongside England, Chile and Iraq.

In Group A, Ghana will join France, USA and while Mali will compete against Mexico, Greece and Paraguay in Group D.

The Under-20 World Cup takes place in Turkey between 21 June and 13 July.