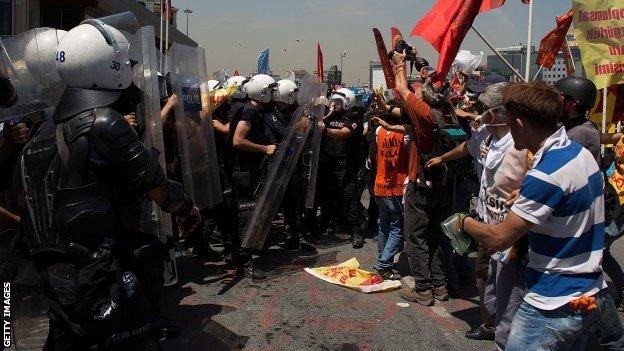 This month's Under-20 World Cup in Turkey will still go ahead, says Fifa, despite the ongoing anti-government protests across the country.

The demonstrations are focused on Istanbul, which will host 11 matches during the three-week tournament that begins on 21 June.

But Fifa said in a statement: "The riots deal with a domestic issue based in two contained areas in Istanbul.

"It is not foreseen that the tournament locations are affected."

The statement continued: "We are in contact with the Local Organising Committee (LOC) and we receive regular updates regarding the security situation.

"The LOC will continue its close co-operation with law enforcement and will regularly update Fifa.

"Safety and security is one of the most important matters in the preparation of any major event. Fifa has full confidence in the Turkish authorities and their developed security concept for the Fifa U-20 World Cup which encapsulates any potential risks."

England are one of 24 teams due to take part and have been drawn alongside Egypt, Iraq and Chile in Group E.

A Football Association spokesperson said it would only act on the advice given by the world football body.

"We've been in regular contact with Fifa," he told BBC Sport.

"We haven't made any extra security provisions for the team. This is Fifa's tournament and it will decide on those matters."