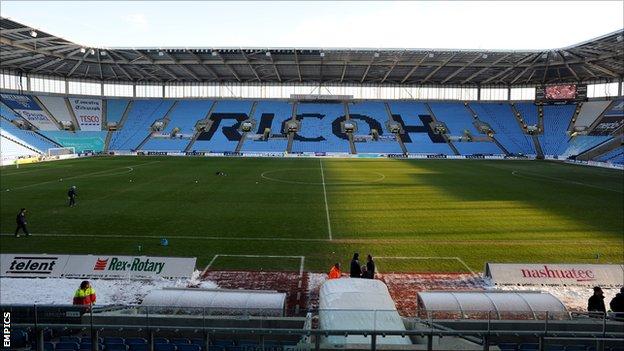 Coventry City have been made an offer to play rent-free at the Ricoh Arena next season by their stadium owners.

The League One club have now been involved in a rent dispute with Arena Coventry Ltd (ACL) for over a year.

ACL have made an offer to the Sky Blues to play "free of any rental fee".

is the subject of bids from six potential buyers.

It is not yet clear whether the offer would still apply if one of those bids is accepted by administrator Paul Appleton, after Thursday's final deadline, and the club subsequently comes out of administration.

City have so far spent eight seasons at the Ricoh Arena, having moved there in 2005 after selling their old ground Highfield Road, the Sky Blues' home for 106 years, for redevelopment.

The threat to leave the Ricoh first surfaced in December 2012, but the Sky Blues saw out the season there after the parties agreed a short-term deal in late March.

And ACL now claim to have become "deeply concerned with how the emotions of Coventry City supporters have been tested over recent months and more especially the past few weeks."

In a statement, ACL said: "We have today notified the Football League of a proposed solution for the coming season to enable the football club to fulfil its commitments under Football League regulations, and to provide stability whilst Coventry City Football Club Limited, which owns the League Share, remains in administration.

"All charges incurred on matchday as a consequence of staging a match will be passed through at cost.

"Whilst these sums may vary depending on attendances, it should be noted that policing, stewarding and pitch maintenance have historically been directly managed and paid for by the club.

"Given ACL wishes to ensure it provides the best playing surface possible, it will now take direct responsibility for future management and maintenance of the pitch."

Coventry owners Sisu have so far been unavailable for comment following this latest development.