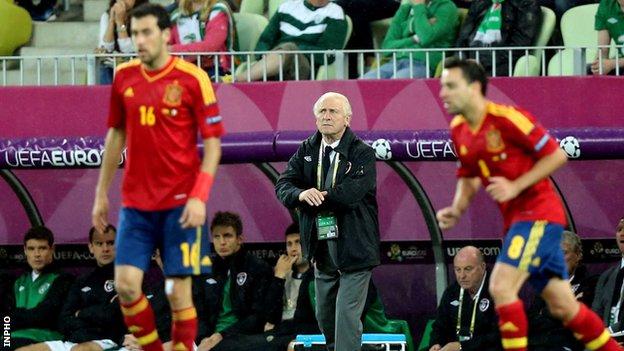 Giovanni Trapattoni is optimistic there will be no repeat of the Euro 2012 mauling by Spain when his Republic of Ireland meet the world champions in New York on Tuesday night.

Trapattoni believes the Irish are better equipped mentally 12 months on from the 4-0 defeat in Gdansk.

"It's a different weight, the international game," added Trapattoni.

"We qualified for the Euros, but a lot of football is in the head and many of the players did not have this habit."

Trapattoni believes a relative lack of experience - only Shay Given, Richard Dunne, Damien Duff and Robbie Keane had been to a finals tournament before - took its toll at Euro 2012.

Sure, they (Spain) will win, but it will be a good test for us

"After this disappointment, I couldn't understand why the team played well until the Euros, but I know this now.

"At that moment, only people like Robbie Keane and Richard Dunne had experienced this, and there was some anxiety among the players.

"If we could repeat our Euros without this great weight on our shoulders and without one or two silly mistakes, I think we could repeat this game and not suffer against Spain.

"It was important that we started a new attitude, a new mentality. That was our job."

After the Euro 2012 disappointment, things got worse for the Irish as they were hammered 6-1 by Germany in a World Cup qualifier in Dublin in October.

However, the Republic's form has steadied since then as the shape of the side has changed considerably with the inclusion of younger players, including Seamus Coleman, James McCarthy and Marc Wilson, appearing to rejuvenate the Irish.

Since the humiliation by the Germans, the Irish have lost just one of eight games although they have not faced an opponent of the stature of Spain during that period.

The world and European champions are preparing for the Confederations Cup and Trapattoni is taking a realistic approach to his team's final fixture of the season, which kicks off at 0100 BST at New York's Yankee Stadium on Wednesday morning.

"Sure, they will win, but it will be a good test for us."