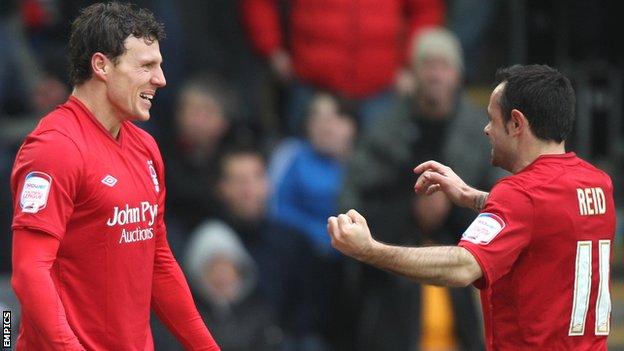 Striker Darius Henderson believes Nottingham Forest can push for a place in the top six next season.

The Reds missed out on the Championship play-offs on the final day of last season, but he feels even automatic promotion is a possibility next term.

Henderson told the club website: "I believe we have a very strong chance of finishing in the top six next season.

"Maybe, with a bit of luck, we could even claim a top two place. That would be great, but it will be difficult."

Victory on the final day of the season would have put Forest in the top six, but Anthony Knockaert scored a last-minute goal to put local rivals Leicester City in the play-offs instead.

Henderson, who with the club last week, is now 31 and wants to play in the Premier League again before the end of his career, having previously played in the top flight for Watford.

He said: "There are some massive clubs with huge potential in this division but I am looking forward to the challenge.

"I definitely want to get back into the Premier League and, having signed for Forest for another two years, that is my target.

"I feel as fit and fresh as I've ever done and now I will be able to settle and fully concentrate on the task ahead."

The forward added: "I've only been here six months but I've thoroughly enjoyed it - the staff and players have been fantastic to me and helped me settle in very quickly.

"The gaffer made it clear that he wanted to sign me, which showed he had confidence in my abilities.

"There was no doubt in my mind that I wanted to make the move happen and I'm delighted to have put pen-to-paper.

"This is a fantastic club with a great fan base and I am proud to be a part of it."