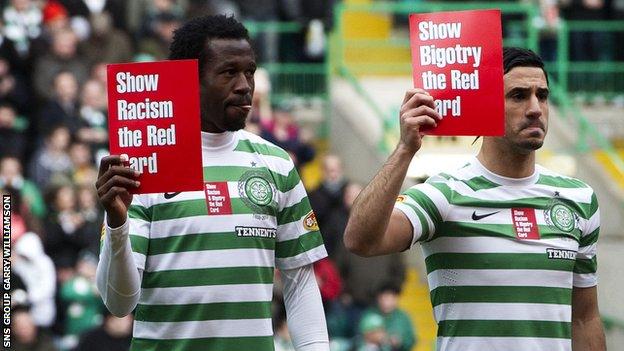 Scottish clubs have voted against implementing stricter regulations to combat racism and sectarianism.

Among the deterrents considered at the Scottish Football Association's general meeting were longer player suspensions, points deductions and stadium bans.

But members decided against the introduction of automatic sanctions.

SFA president Campbell Ogilvie said the result was "disappointing", adding that there will be "consultation on a more robust set of disciplinary measures".

A statement from the governing body explained that the "majority of members voted against proposals to introduce strict liability to combat unacceptable conduct in Scottish football".

I think this was an opportunity rather than a threat, to try and deal with our own affairs

The statement added: "None the less, the members did agree in principle to continued engagement on the topic and to devise an action plan to establish a viable deterrent to such behaviour."

Under current regulations, clubs are able to avoid sanctions by arguing that they had taken "reasonably practicable" steps to avoid unacceptable behaviour from fans.

SFA chief executive Stewart Regan explained: "As far as the specific wording and the resolution is concerned, the clubs felt that it was drafted in such a way as to be too onerous; to move to strict liability from where we are now was quite a leap.

"What the clubs have asked us to do is to look at setting up a working party to establish whether there's a viable deterrent for unacceptable behaviour that exists somewhere between our current rules and strict liability."

But Regan made it clear he thinks the present system is flawed, adding: "The current rules are written in such a way that we haven't been successful in bringing any prosecutions forward.

"There has to be some sort of middle ground that moves us forward.

"I think this was an opportunity rather than a threat, to try and deal with our own affairs, get them in order prior to perhaps the world governing body telling us how we should deal with such matters.

"However, I can fully understand the arguments presented by a number of the clubs and what we will do is take those away, look at what we might be able to do and come back with an alternative proposal.

"There is no direct timescale from either ourselves or from Fifa or Uefa. It's about trying to put an action plan together to stamp out unacceptable behaviour at our football grounds and try and develop a way of attracting fans and families in particular to come back to the game."

Responding to the vote on new measures to tackle unacceptable behaviour, David Scott, campaign director for anti-sectarian charity Nil By Mouth, told BBC Scotland: "Football was asked to stand up and be counted, and was found wanting.

"It certainly sends out the wrong sort of message, not just in Scotland but around European football.

"I know that the SFA are very keen for Glasgow to be one of the host cities for the 2020 European Championships and I'm not quite sure today's message really says to people, 'we're open for business'."

A total of 45 resolutions were discussed at the SFA's Hampden meeting - with a 75% majority required to pass each motion.