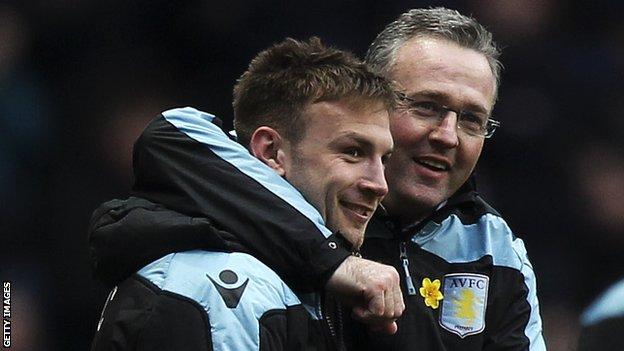 The 21-year-old Austria international, who joined Villa's academy from Rapid Vienna at the age of 15 in 2006, is now tied to the club until 2016.

Weimann's new deal comes on the back of him scoring 12 goals last season, eight of which were in the Premier League.

"I'm really happy that I've signed. I love the club and it's been brilliant for me, for I have a feeling of being at home here at Aston Villa," he said.

"I did not expect at the start of the season it would go the way it did, with me being involved, starting games almost the whole way through.

"It was exciting to be part of the team's development because the potential within this young, exciting team is really strong."

Weimann follows the lead of another of Villa's promising youngsters, Nathan Baker, in signing a new deal.

He added: "Like the other young players in the team, I want to keep improving as a player and keep pushing Villa as high as we can in the Premier League."

Manager Paul Lambert said: "He got a sustained run at it last season and he showed the quality that marks him out as a natural finisher. He definitely knows where the goal is.

"Whether Andi Weimann is on x amount of money or not, you'll always get the same player. He has drive and a hunger to succeed and that's vital. That's what we're looking for here at Villa."

Weimann, who has made six appearances for Austria, added: "I feel like I owe the manager as he backed me last season after he came in.

"The supporters, too, have been brilliant with me. They've really taken to me, which I'm delighted about.

"I've been here for six seasons now, having started with the academy in 2006, and it's great to be a part of an exciting future at Villa.

"We stuck together last season. Having so many young players helped because we grew together as a team.

"I'm sure the manager will bring in more new faces to make us stronger."