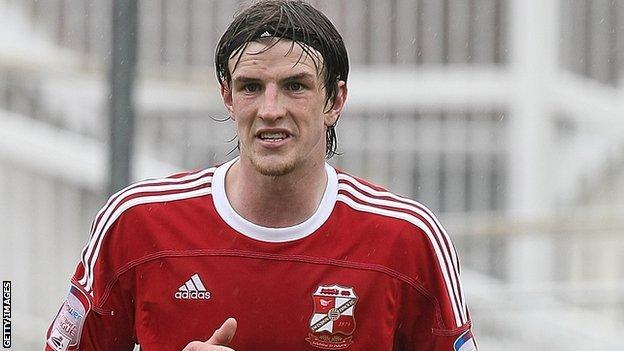 Bristol City have completed the signing of Swindon Town defender Aden Flint for a fee thought to be around £300,000.

Flint made 79 appearances for Swindon, scoring eight goals, and joins their League One rivals on a four-year deal.

"The club has been looking for this type of player for a long time," City head coach Sean O'Driscoll said.

"I think Aden was even mooted before I came here. When I walked through the door, people said 'have a look at him' and that's what we've been doing. We're delighted to have him on board.

"I saw Aden play for Alfreton a while back, but in the last 18 months he's improved immensely. I've seen him four or five times since then and he's grown on me.

"He's not the finished article and we're not bringing in an established centre-half, but he's that type who we can bring in and develop."

Swindon recently took up an option on Flint's contract, extending his deal for another season. But after Bristol City made an unsuccessful bid for the player, he handed in a transfer request.

City then tabled an improved offer which was accepted last week, and the deal was eventually concluded on Tuesday afternoon.