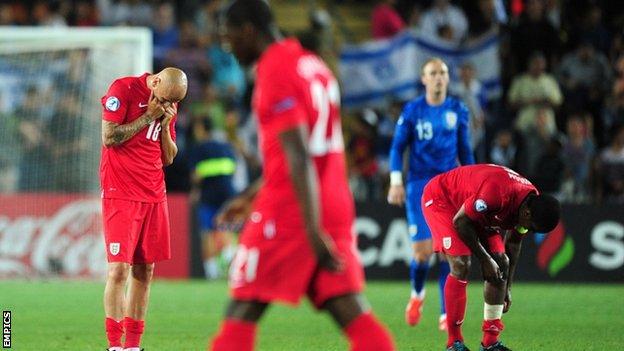 England ended a miserable European Under-21 Championship campaign with a third straight defeat after Ofir Kriaf hit the winner for hosts Israel.

Stuart Pearce's side were seeking a morale-boosting win after being knocked out at the group stage following defeats to Italy and Norway.

But they finished bottom of Group A after Kriaf's finish cast further doubt over Pearce's future as coach.

Thomas Ince and Wilfried Zaha both missed chances for England.

England, who averaged three goals per game in qualifying, return home on Wednesday having failed to secure a single point - or a goal from open play - in 270 minutes of action at the finals.

The only time they found the net was from Craig Dawson's penalty when they were already trailing 3-0 to Norway last Saturday.

Their qualification campaign for the 2015 Championships starts on 5 September at home to Moldova, but whether Pearce will still be in charge remains to be seen.

The former Manchester City manager is out of contract at the end of the month and is due to have talks about his future with the Football Association in the next two weeks.

If this was his final game in charge then there were very few positives to glean.

With their exit having been confirmed at the weekend, Pearce stuck to his pre-match promise of giving his squad's younger players valuable experience. Indeed, the team boasted just two senior caps - Jonjo Shelvey and Zaha.

And Pearce may take some comfort from the fact his side once again created more chances and had more shots on target than their opponents.

A tournament to forget

Just as they did against Norway, England, captained by Liverpool's Andre Wisdom, enjoyed plenty of possession in the opening exchanges - but again, did so without managing to hurt their opponents.

Connor Wickham and Ince both failed to connect after Shelvey got behind the Israel defence to drill a low 12th-minute cross into the area.

Then came England's best moment of the tournament in terms of attacking threat.

Manchester United's Zaha, one of four survivors from Saturday, skipped clear of two defenders before setting up a one-on-one chance for Ince - but his shot was well saved by the onrushing Boris Kleyman, who quickly got to his feet to foil Zaha's follow-up as well.

Israel, hammered 4-0 by Italy on Saturday, were much more menacing after the interval.

Nir Biton rattled the crossbar from 35 yards in the 57th minute before the Israel captain started a neat move that resulted in winger Kriaf curling home a sweetly struck shot from 20 yards in the 81st.

That prompted Israel coach Guy Luzon, who was taking charge of his final game before moving to take over at Standard Liege, to sink to his knees in celebration.

It might have been a happy end for 37-year-old Luzon, but it was a fittingly poor finish to a tournament to forget for England.

In the other game in Group A, a goal by Andrea Bertolacci in the fourth minute of stoppage time against Norway earned Italy a point which was enough to see them finish top.

Norway captain Stefan Strandberg thought he had won it for Norway after putting his side 1-0 ahead from the penalty spot in the 90th minute before Bertolacci scored.