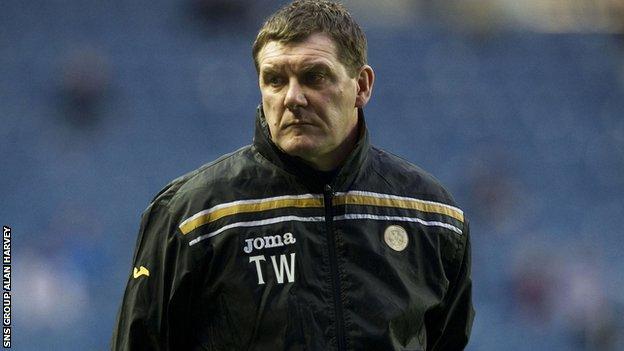 Tommy Wright is the new manager of St Johnstone, with left-back Callum Davidson to act as his assistant.

Former Northern Ireland goalkeeper Wright, 49, was assistant to Steve Lomas, who has left the Perth club to take over at Millwall.

The Saints have not revealed the length of contract given to the former Newcastle and Manchester City player.

A media conference introducing the duo will not take place until Tuesday, 18 June.

Davidson, 36, who won the last of his 19 Scotland caps in 2009, was due to be out of contract this summer but will remain on the playing staff.

The experienced defender began his career with St Johnstone and had spells with Blackburn, Leicester and Preston before returning to the club in May 2011.

"Tommy is the right man for the job," he said. "His appointment will bring continuity to what we did last season.

"He was a big part of the success we has last year being Steve's assistant and bringing in Callum as his number two is a really good move as well. He knows all the boys and will bring a great deal of experience as well.

"He's played at a really high level and it's a really good appointment. All the boys in the dressing room are really happy with it I'm sure."

Lomas and Wright arrived at McDiarmid Park in November of the same year and steered the club to successive places in the Europa League qualifying rounds.

Wright started his coaching career as a goalkeeping specialist at Norwich but made his move into management with Limavady United in his homeland in November 2003.

Spells in charge of Ballymena United and Lisburn Distillery - where he led the Whites to the Irish League Cup in 2011 - followed before he made the move to Scotland.