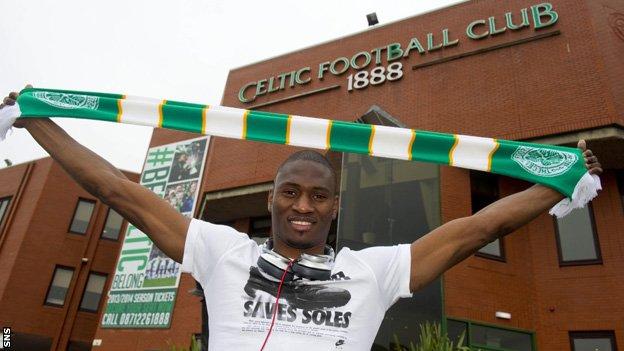 Tommy Langley, a friend accompanying the 22-year-old, said: "There are quite a few clubs interested in Amido.

"But, at the end of the day, he's here and we're trying to get the deal done at Celtic. That's the first priority."

Balde still has a year remaining of his contract, but it would appear that a fee has been agreed between Celtic and the Portuguese top-flight club.

Reports suggest Crystal Palace have also expressed an interest after their promotion to England's top flight.

He's a big strong lad, athletic, great touch and he's a boy that can only get better

But the player's agent and uncle, Catio Balde, told BBC Scotland there were no plans to talk to the London club.

And Langley said the former Portugal Under-20 international was "a happy boy" to be meeting with Celtic.

"They are a fantastic football club," said the former Chelsea and Crystal Palace striker. "They are in the Champions League and a great sounding board for players to come and play top-class football.

"But we'll see where it goes from here. He's got a couple of things to sort out."

Asked what qualities Balde had, Langley replied: "He's a big strong lad, athletic, great touch and he's a boy that can only get better."

Celtic manager Neil Lennon also lauded the striker when he admitted last week that Balde was among his summer targets.

"He is a player we have scouted and looks the type we would like," he said.

"But, whether we can get a deal done or not, I don't know. We are just looking to strengthen that area.

"Balde is a big striker and has the physical attributes we are looking for, but he is interesting other clubs."

The 6ft 4in striker born in Guinea-Bissau scored nine goals in 27 games this season as Vitoria finished ninth in their domestic league.

He signed a two-year contract with Vitoria last summer following his release by Sporting Lisbon.

While with Sporting, Balde had loan spells with Santa Clara in the Portuguese second tier, Badajoz in the Spanish Third Division and Cercle Brugge in Belgium's top flight.

Lennon, who also admitted an interest in Wolves striker Kevin Doyle, has been bracing himself for summer interest in top scorer Gary Hooper, who was the subject of a failed bid from Norwich in January.

The Englishman and Republic of Ireland striker Anthony Stokes have both stalled on signing contract extensions.

Suggestions of an interest in Dundee United striker Johnny Russell have yet to lead to a formal bid and the former Scotland Under-21 international is to have a medical at Derby County after a fee was agreed with the Championship club.

Lennon has already found himself gazumped by a Premier League club this summer, with Aston Villa agreeing a deal to sign midfield target Aleksandar Tonev from Lech Poznan.

Meanwhile, Sunderland's former Rangers central defender Carlos Cuellar said on Twitter that a rumour circulating that he had signed for Celtic "isn't true".