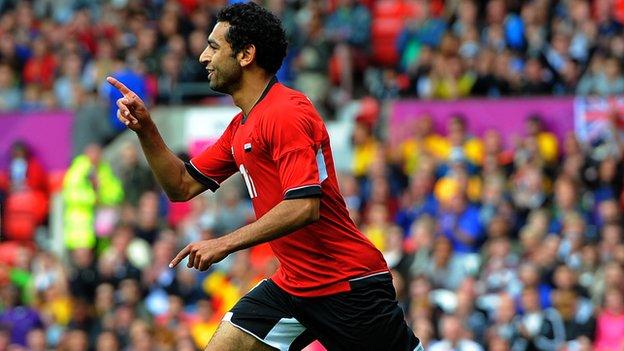 Egypt have taken another step closer to reaching the World Cup in Brazil after beating Zimbabwe on Sunday.

Mohamed Salah scored a hat-trick in a 4-2 victory that puts his side eight points clear at the top of qualifying Group G and on the verge of the play-offs.

Second-placed Guinea beat Mozambique in the later kick off to keep alive their faint hopes of qualification.

Mozambique, along with Zimbabwe, cannot qualify and are playing for pride.

Egypt made a fast start to the game in Harare with Mohamed Aboutrika scoring a fifth-minute opener. But Zimbabwe levelled through Knowledge Musona to leave the sides on equal terms at half-time.

Two second-half strikes from Salah put Egypt back in control at 3-1 and although Lincoln Zvasiya pulled one back for Zimbabwe on 81 minutes, Egypt avoided a nervy finish when Salah completed his hat-trick two minutes later.

Although Egypt won the Africa Cup of Nations a record seven times between 1957 and 2010, they have appeared at the World Cup only twice, and the last time was 23 years ago.

Guinea ensured that Egypt will have to wait a little longer before confirming their place in the final round of qualifying matches, after they beat Mozambique by 6 goals to 1 in Conakry. There were two goals each for Guinea's Sadio Diallo and Mohamed Yattara, with Mohammed Diarra and Ibrahima Traore also on the scoresheet.

Elsewhere on Sunday, Jonathan Pitroipa, voted the best footballer at the 2013 Africa Cup of Nations in South Africa, threw a lifeline to Burkina Faso with the goal that edged Niger 1-0 in Niamey.

It leaves the Stallions four points behind Group E frontrunners Congo. The two countries clash in Pointe-Noire next weekend.

A late first-half brace from Islam Slimani set up Group H leaders Algeria for a victory in Benin as they came from behind to win 3-1.

Rudy Gestede opened the scoring for Benin at Stade Charles de Gaulle in Porto Novo before Slimani hit back with his two goals. Nabil Ghilas added a match-winning third after coming off the bench. To add to Benin's misery, they had Badarou Nana Nafiou sent off in the second half.

Mali lost pace with Algeria after they were held to a 1-1 draw in Bamako by Rwanda who lie bottom of the group. Rwanda shocked the hosts by taking a first half lead through Meddie Kagere. Mahamadou N'Diaye equalised for Mali with 13 minutes remaining. Mali are two points behind Algeria in Group H.

Cameroon surrendered first place in Group I to Libya on goal difference after they suffered a surprise 2-0 defeat to Togo in Lome. Despite the absence of unavailable star Emmanuel Adebayor, Togo scored in each half through Komlan Amewou and substitute Lalawele Atakora.

Cameroon, who lost all three matches at the 2010 World Cup and failed to qualify for the last two Cup of Nations tournaments, were playing their first competitive game under new coach Volker Finke who had to make do without injured star Samuel Eto'o.