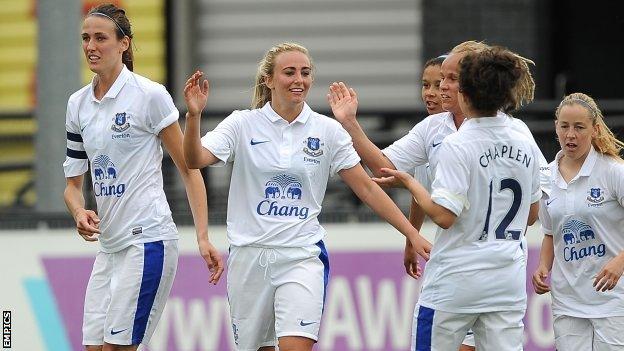 Everton Ladies moved up to third in the Women's Super League after beating Chelsea in the final match before the seven-week mid-season break.

The Toffees bounced back from defeat in the Merseyside derby and leapfrogged Chelsea after a 4-1 win.

The win moves Everton into third behind Liverpool and Bristol Academy.

Both Chelsea and Everton were looking to bounce back from disappointing midweek derby defeats when they met at Tooting and Mitcham on Sunday.

Emma Hayes's side had suffered a 2-1 loss to Arsenal on Thursday night, while Andy Spence's Everton had lost out 4-1 to Liverpool on Tuesday.

Victory for Chelsea would have taken the Londoners within touching distance of league leaders Liverpool and Bristol Academy.

But it was Everton who would go into the break on the tails of the top two after the Merseysiders bounced back thanks to the in-form Duggan and Hinnigan.

But Hinnigan opened for Everton after just 12 minutes with a tap-in after Duggan had blasted a shot at the Chelsea goal.

England striker Duggan then made it 2-0 seven minutes later with a left footed shot into the right hand corner.

Duggan continued to press the Chelsea defence after the break and her determination paid off as she made the most of a goalmouth melee to score Everton's third on 74 minutes.

Four minutes later Duggan sealed her hat-trick and all three points when she converted from the spot after Everton skipper Jill Scott had been brought down in the box by Kylie Davies.

Ward pulled a goal back 11 minutes from time with a tap-in from a Helen Bleazard pull-back and though Chelsea continued to press at the death, Everton held firm for the win.