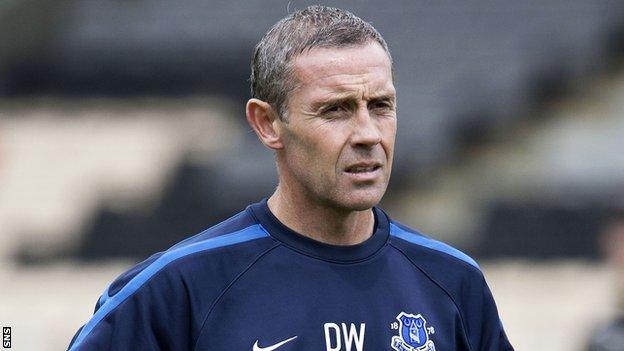 Former Scotland captain David Weir is on the brink of becoming the new manager of Sheffield United.

BBC Radio Sheffield understands that a deal is being finalised between the League One club and the 43-year-old.

Weir was recently interviewed for the manager's job at Everton, where he has been a reserve team coach, before they appointed Roberto Martinez.

The Scot had been close to signing for the Blades as a player after leaving Rangers in January 2012.

He trained under then manager Danny Wilson as the defender was keen to extend his playing career.

Instead, he returned to former club Everton to take up a coaching role, although he initially continued to play for the reserves at Goodison.

Now, with fellow Scotsman David Moyes having moved to Manchester United, Weir is poised to make his own first move into management with the Blades.

United, who missed out on promotion after defeat in the play-offs, had been looking for a new manager after

They failed in attempts to attract Central Coast Mariners coach Graham Arnold, and

and former Portsmouth, Blackpool and Blackburn Rovers manager Michael Appleton were also linked with the vacancy.

Falkirk-born Weir, who won 69 caps for Scotland, began his career with his local club before moving to Hearts, Everton then Rangers.