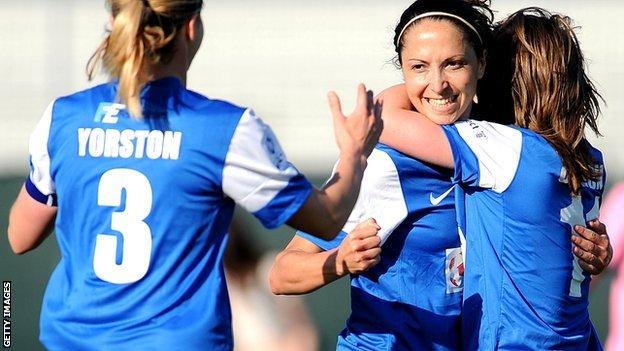 Liverpool and Bristol Academy Women continued their winning ways before the mid-season break in the Women's Super League.

The second-placed Vixens overcame Lincoln 2-1 in the early kick off.

Laura Del Rio and Nikki Watts both scored to secure the points for the home side.

However, Liverpool then regained top spot after they beat Birmingham City 4-1 at Halton Stadium in the later kick off.

Kerys Harrop scored for the visitors but a brace from Nicole Rolser backed by a Lucy Bronze header and deflected goal off Natasha Dowie from a Fara Williams shot won it for the Reds.

Bristol went into their final match before the mid-season break knowing that three points against Lincoln would keep them in the mix at the top of the table.

The Vixens manager Mark Sampson had urged his second-placed side not to worry about their league standing going into their final game.

Sampson simply wanted his team to keep up their winning momentum and they duly responded at Stoke Gifford Stadium.

Ann-Marie Heatherson almost got the Vixens off to a dream start when she forced England keeper Karen Bardsley into a flying save early on.

Lincoln were in the match too though and Jess Clarke came close to making an early mark after jinking past three players, but she drove her effort wide.

Heatherson and her strike partner Ellen Curson piled the pressure on Bardsley's goal, but the keeper and her defence stood firm.

The deadlock was finally broken just after the half-hour mark when Spaniard Natalia Sanchon pulled the ball across the face of goal from a throw-in and Laura Del Rio tapped home.

But Nikki Watts, on for the injured Del Rio, gave Bristol a cushion 10 minutes from time when she bundled the ball home after Bardsley had spilled a backpass under pressure.

The lively Clarke pulled one back for the Lady Imps four minutes from time when she blasted a long-range shot beyond Siobhan Chamberlain, but it was little consolation for the visitors, who remain without a win.

Liverpool needed to take all three points against Birmingham to return to the top following Bristol's victory.

Matt Beard's side were on good form having beaten Merseyside rivals Everton 4-1 in their last game and were looking to make it five wins out of six matches going into their final game.

Birmingham, on the other hand, were hoping to put a midweek loss to Bristol behind them and kick-start a push for points.

But they had it all to do after just 14 minutes when Liverpool midfielder Nicole Rolser pounced to prod the ball beyond keeper Mary Earps after a Natasha Dowie effort had come off the post.

Blues defender Kerys Harrop struck back for the Blues 12 minutes later when she headed home at the back post from a corner.

But Reds defender Lucy Bronze put her side ahead going into the break when she rose to head powerfully past Earps for 2-1.

Jo Potter was unlucky not to level for Birmingham just after the hour but her effort hit both posts before bouncing away to safety.

It could have been game over for the visitors moments later when Liverpool midfielder Jess Holbrook blasted a ball goalwards only to see the shot hit the post.

Fara Williams gave the home side the edge seven minutes from time, though, when she unleashed a shot from distance that Dowie deflected into the net for 3-1.

Rolser then capped a fine individual performance when she latched on to a through ball and confidently knocked a shot into the net for 4-1.