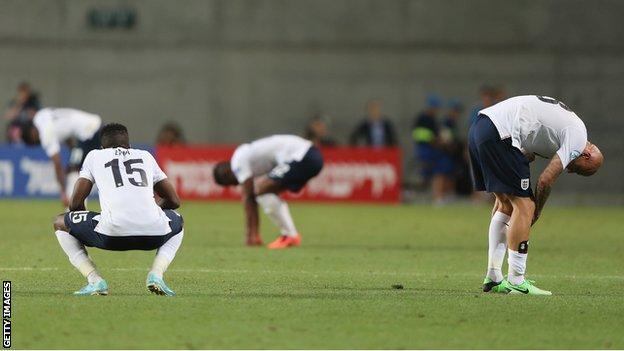 Pearce was critical of his players as goals from Fredrik Semb Berge, Jo Inge Berget and Magnus Eikrem eliminated Pearce's men with one group game left.

"I don't think the players have done themselves credit to be honest with you, individually and collectively," said the England Under-21 coach.

"You get what you deserve in football."

Having lost their opening game of the tournament 1-0 to Italy, England needed a positive result against Norway, who they had beaten twice in the qualifying campaign.

Yet they will return home after Tuesday's third and final group game against hosts Israel after a poor performance on Saturday in front of England manager Roy Hodgson.

Craig Dawson's late penalty proved nothing more than a consolation as England failed to deliver at a tournament they qualified for with ease.

"We have got nothing out of this tournament so far and now we have to concentrate on doing things properly for the tournament's sake and beat Israel," Pearce added.

"When you wear an England shirt, that's the least of the demands that are put on you.

"We're disappointed for varying reasons and we will have a look at that over the next couple of days. But over the two games we didn't perform consistently enough."

Asked why England had fared so badly, Pearce said it was for a "multitude of reasons".

England were without suspended winger Thomas Ince against Italy, while Manchester United player Wilfried Zaha was injured. However, both started against Norway.

"The suspensions and injuries to a couple of our players for the first game didn't help and we never got any rhythm from the Italian game," said Pearce, whose contract as coach expires later this month.

Pearce indicated that he is keen to carry on in the role despite England's below-par performance at the tournament, and is due to have talks with the Football Association on his return.

"We'll talk about my future and see what they have to say," he told BBC Sport. "We'll see if they have a long term plan for me."

"It's not good enough from an England team," said the Blackpool player.

"We have been on the road and beat teams, we were unbeaten for nine games coming in to the tournament but we haven't turned up here.

"It hurts, this is a massive stage and we wanted to play on it."