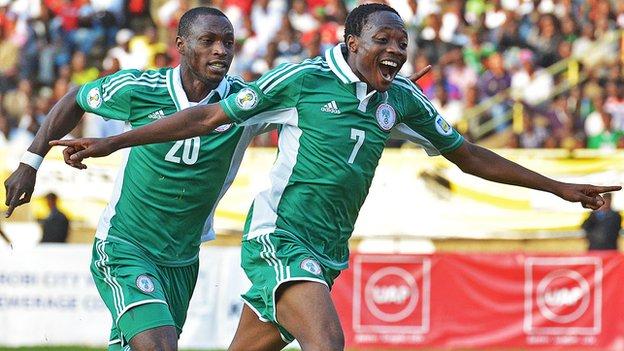 Nigeria have made nine changes to their squad for the Confederations Cup from the one that won the Africa Cup of Nations in February.

Coach Stephen Keshi will take four uncapped players to the tournament, which kicks off in Brazil on 15 June.

Keshi has a settled look about his defence but has made a host of changes with Victor Moses and Emmanuel Emenike unavailable.

Joseph Yobo, Peter Odemwingie and Obafemi Martins have been overlooked.

Keshi was criticised by local media before the Nations Cup for choosing inexperienced, home-based players but since winning the continental championship has silenced the doubters.

Nigeria are in Group B along with Tahiti, Uruguay and Spain for the Confederations Cup, while Brazil, Japan, Mexico and Italy make up Group A.

Before heading to Brazil, Nigeria travel to Namibia for a World Cup qualifier in Windhoek on Wednesday.

The Super Eagles sit at the top of their group, two points ahead of Malawi with two rounds of matches remaining.