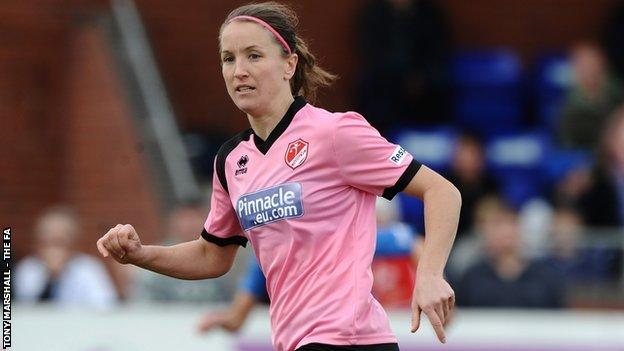 England and Lincoln Ladies captain Casey Stoney will be writing regular columns for the BBC Sport website during the season.

This time, she explains why she is not worried about an injury ahead of Euro 2013, how Liverpool can win the Women's Super League and why she can understand Doncaster's demotion next season.

The European Championship is now only a month away but as the Women's Super League season takes a break at its half-way point some of us are wearing the scars of what has been an intense and testing season.

The domestic game hits the pause button until August so the England team can prepare for Euro 2013, but I am not the only one who is injured as a result of the games coming thick and fast.

This season has seen a massive increase in quality and arguably it should stand the squad in good stead. Every team has international players who are at the top of their game so if you play against them each week you can only improve. And yet, with seven England players injured, perhaps the increase in intensity during the first half of the season has taken its toll.

I suffered a hamstring tear in the 1-1 draw against Birmingham on Sunday 19 May and have not played since but I'm not panicking about my European Championship chances.

No-one wants an injury so close to a major tournament but my rehabilitation is ahead of schedule and I'm hoping to be back training in two weeks.

If I'm being honest, I didn't sleep too well the night I did it. When you have an injury like that you start thinking 'this could be my Euros over'. And waiting for the scan results to come through, you are sat there praying that it won't keep you out for a long time.

Fortunately, the physio said she was surprised with the amount I could do despite the tear and I am ahead of the timings that they give you. I keep myself in shape and look after myself generally, so I think they may have played a part.

Reflecting on it, it makes you wonder if things happen for a reason. We didn't have many games in pre-season and, having missed part of it because of another injury, I think my body wasn't quite ready for such a busy schedule. Maybe it has been the same for other players too.

It interested me that Liverpool manager Matt Beard also believes that the schedule has played its part in the number of injuries this season.

At Lincoln we have played 13 games in the first half of the season, more domestic games than any other team in the league, and we have a small squad so we haven't been able to rotate our players as much as we would like.

At Lincoln, we are still awaiting our first league win. A lack of goals has been our biggest problem and you can tell that we only train twice a week. Overall the season has been disappointing. 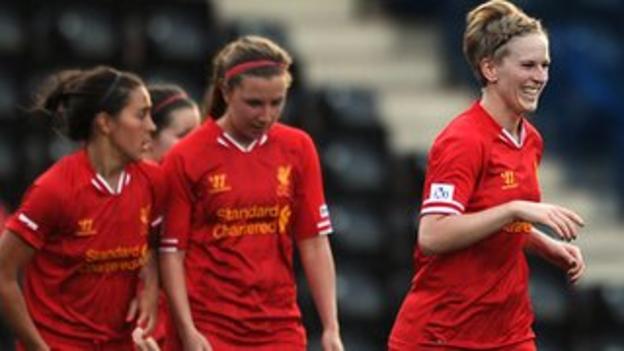 Contrast that with top-of-the-table Liverpool, who are training full-time and, from what I've seen of them this season, it shows. In fact, I've been so impressed with them that I think they could nick the league from reigning champions Arsenal.

I was watching from the sidelines when we lost 3-2 to them recently and their movement and the way they link up was very clever given they've only been together for a short amount of time.

Arsenal are always strong but I can see Liverpool taking them all the way in the league. It is fantastic that Liverpool have put in the investment to take women's football that seriously and are taking it in a new direction. I hope more clubs follow suit.

Doncaster Rovers Belles' relegation to the WSL 2 next season and Manchester City taking their place has caused lots of controversy, with the Yorkshire club waiting for an appeal decision next week.

All about Casey Stoney

Obviously it is disappointing from a player and fans perspective to learn this news after just one game of this season, but I do firmly believe that the FA is making these decisions based on what is good for the women's game.

I am no expert but I believe that if there has been a better bid to drive the game forward, then that is what should be chosen.

The decision won't have been taken in a heartbeat. Everything would have been looked at: the whole structure of the club, how the club will become sustainable and how it is going to move forward.

I'm disappointed for my friends who play in that team. They are working hard at the club but if you go down you have to fight to get back up again.

I realise that Manchester City didn't even finish top of the Premier League last season [the current second tier] and maybe starting them in the WSL 2 would have been an easier decision, but the FA have stuck to their criteria that the best bids win and I can see the logic in that.

Sexism must not be tolerated

Unfortunately for her, Gresley FC coach Hannah Dingley was in the news recently after suffering sexist abuse from Northwich Victoria boss Lee Ashcroft. Former England Under-21 international Ashcroft was banned for 10 games as a result of a complaint from Dingley.

Hannah is someone I know as she coached for us at Lincoln last season. She was a good coach and she is a strong personality as well. She knows what she wants to achieve in football and she was someone I had a lot of respect for.

I'm glad she took it to another level and did something about it because that sort of abuse cannot be tolerated. It doesn't matter whether you coach in the men's or the women's game, whether it's normal life or in the workplace, it's not acceptable.