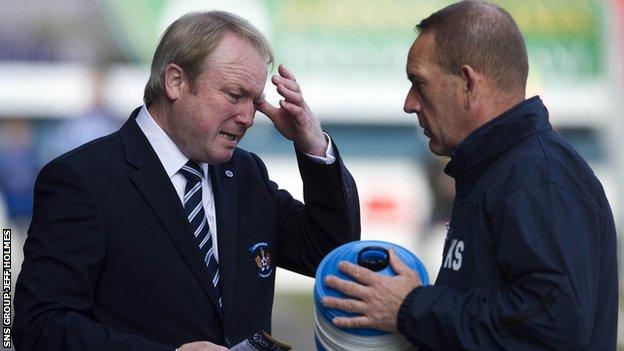 The Rugby Park club ended the season ninth in the Scottish Premier League.

And the Ayrshire outfit have been found guilty of failing to ensure that Shiels complies with Scottish Football Association protocol.

Shiels has been subject to a number of touchline suspensions and was served with another ban this week for breaching rules with his comments.

"Kenny's position is under review at present," said Johnston.

"This is due to his failure to meet a contractual performance related target and potential breaches of contract relating to media comments and observance of Scottish FA articles and rules and SPL articles and rules."

Shiels's future has been heavily questioned after he was given a four-match ban for bringing the game into disrepute, with two of those suspended until the end of next season.

Kilmarnock looked set for a top six finish but could only manage one point from two home matches against St Mirren and Dundee in the final pre-split fixtures.

And they slumped to four defeats in the five post-split games.