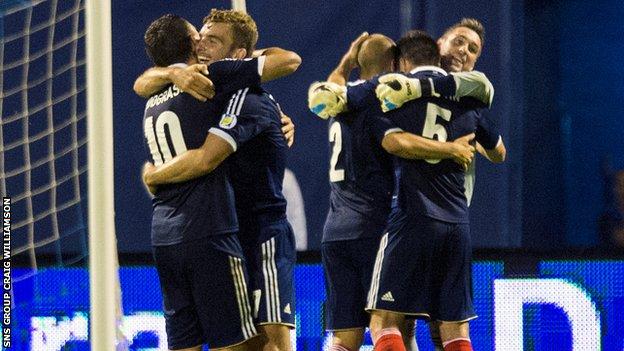 "I'm incredibly proud," Strachan told BBC Scotland as Robert Snodgrass grabbed the only goal to stun the side ranked fourth in the world.

"Some of them don't get a game for their club regularly, some of them have not played for a month.

"But they were full of heart and it's amazing what you can do with a group of players who play for each other."

Strachan's men arrived at the Maksimir Stadium already out of the race for Brazil in 2014 and huge underdogs against Group A's top seeds who had amassed 16 points from their first six outings.

But a stretching volley from Snodgrass on 26 minutes handed the Scots their first competitive victory since beating Liechtenstein in October 2011.

The visitors were under pressure for long periods but defended stoutly and goalkeeper Allan McGregor was rarely tested.

With players tiring, Scotland were guilty of surrendering possession too easily in the second half, which Strachan acknowledged.

"It's a great result and we must enjoy the result," he added.

"But when I look at it from a coach's point of view, there are one or two things you would like to brush up on.

"This is something that makes us happy for a while and makes us feel good about ourselves.

"It's satisfying. The lads played from their hearts. They played as a group, 24 of them trained as a group, which made this possible. So we thank them for that.

"I wanted a performance. It was 90% that we weren't going to win. We would like to think that the work that they put in helped.

"You can't do it if you're not really convinced about doing it and I thought the group themselves were brilliant. We got a response from training and we got a response tonight.

"I really feel pleased for everybody who gets on the plane, who travelled, who were watching. When you're with the national side, the group makes the whole country happy."

Russell Martin was a stand-out in central defence, alongside Grant Hanley, while James McArthur put in an incredible shift in a defensive midfield role.

"There is heroic in terms of defending," explained the manager. "There is also heroic in holding the ball up. Shaun Maloney was doing that, and James McArthur.

"Craig Conway and Steven Naismith went on and did well. I think that's as good as I've seen Alan Hutton play. Steven Whittaker as well. As a partnership at centre-half it wasn't bad too.

"Other ones have to get up to a level of fitness to play at this level and that's hard work."

Wigan's McArthur described the victory as "something special", adding: "We needed strong characters and everyone gave it their all.

"We worked so hard for each other and I think the win was down to spirit and character.

"We can still play better on the ball but we were up against world class footballers."

In the absence of a host of experienced players, James Morrison captained Scotland for the first time.

"If it's one time only, I'm happy with that," laughed the West Brom midfielder.

"It's a great feeling. Over the next week, I'll look back on reflect on the achievement

"A few of the lads were dead on their feet, cramping up, but we kept on going and got the job done. It was a solid performance all round.

"We've struggled for confidence and this result will help.

"Now we have to look forward, without getting carried away, and keep building towards the next campaign."