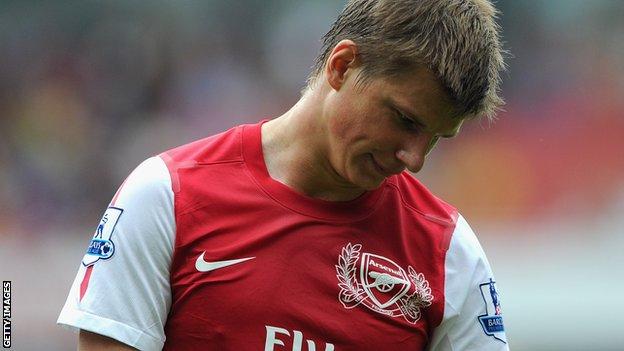 Arshavin, 32, who signed from Zenit St Petersburg for a reported £15m in January 2009, was one of 14 players not offered a new contract by Arsenal.

Santa Cruz joined Manchester City for around £18m from Blackburn in 2009 but played just 20 games for the club.

The Frenchman made 78 appearances for Spurs, 24 of those coming last season.

Phil Neville leaves Everton, eight years after moving to Goodison Park from Manchester United. The former England international, who made just over 300 appearances in all competitions for the Merseyside club, was considered for the Everton manager's post eventually taken by Roberto Martinez.

Another ex-England player on the list of players released is David Bentley. The 28-year-old winger leaves Spurs after five years, while John Bostock, who also moved to White Hart Lane in 2008, is another to depart.

The midfielder joined the club from Crystal Palace as a 16-year-old but was never able to establish himself at Spurs, playing on loan for the likes of Hull City, Swindon and most recently Toronto.

Arsenal have released the largest number of players from their squad, with Arshavin one of 14 to depart the Gunners, while Swansea City have released just one in Mark Gower.

Filippo Mancini, 22, follows his father Roberto, who was dismissed following the defeat by Wigan in the FA Cup final, out of Manchester City.